Jewish Heritage Museum Presents the Jews of Cochin, in a Talk by Gila Mordechai Rosenblatt 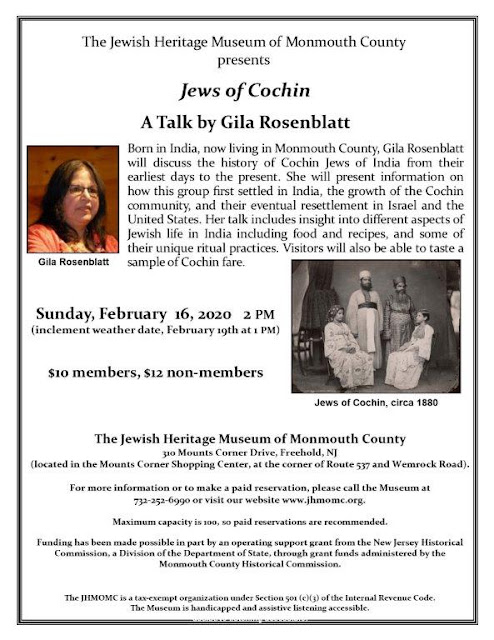 WHEN: Sunday, Feb. 16, 2 PM
WHERE: The Jewish Heritage Museum is located in the Mounts Corner Shopping Center, at 310 Mounts Corner Drive, Freehold, NJ, at the corner of Route 537 and Wemrock Road (between the CentraState Medical Center and Freehold Raceway Mall).  It is on the second floor of the historic Levi Solomon Barn.

In conjunction with its current exhibit, Jews of India: The History and Practices of the Bene Israel, Cochin, and Baghdadi Jews, the Jewish Heritage Museum of Monmouth County presents a talk, Jews of Cochin, by Gila Mordecai Rosenblatt. Join us for a personal, informative talk and discussion about this unique story of Jews whose history may be traced to biblical times.

Born in Cochin, South India, now living in Monmouth County, Gila Rosenblatt will discuss the history of the Cochin Jews of India from their earliest days to the present.  She will present information on how this group first settled in India, the growth of the Cochin community, and its eventual resettlement in Israel and the United States. Her talk includes insight into different     aspects of Jewish life in India including food and recipes, and discussion about some unique rritual practices. Visitors will also be able to taste a sample of Cochin fare.

Cochin Jews have lived for two millennia on the fertile Malabar Coast of southwest India. This tropical area is now the modern Indian state of Kerala, named for the kera, or coconut palm tree. Though tradition has it that there were once many thousands of Jews in Malabar, no more than 2,500 were recorded in recent centuries, and only about 60 remain there today.

The oldest documentary evidence of a Jewish community in Kerala dates from 1000 CE, when a Jewish leader named Joseph Rabban received a set of engraved copper plates from the Hindu ruler of Cranganore. These plates, which are still preserved in the Cochin Paradesi Synagogue, list economic and ceremonial privileges which were afforded the Jews.

One of the most striking things about the Cochin Jews is the fact that they lived in India for so many centuries without experiencing anti-Semitism or persecution from their Indian neighbors. Their decision to leave for Israel after 1948 was not an easy one. It developed out of a long     history of Zionist activity and idealism.

The oldest of six children of Miriam and Benjamin Mordechai, Gila made Aliyah and moved to Israel at the age of 17. She lived in a kibbutz for 6 months where she learned Hebrew. After receiving her B.A. from Tel Aviv University in 1976, where she also met her husband Ruben, they married and immigrated to the United States to continue their educations. Gila recently retired after a 34-year career at A T & T Bell Labs in Holmdel, as an information service and disaster recovery engineer. Currently, Gila and her husband live in Aberdeen. She is a member of Temple Beth Ahm in Aberdeen. Most of her family lives in Israel now and Gila visits them     frequently.

For more information or to make a paid reservation (non-refundable), call the Museum at 732-252-6990, or visit www.jhmomc.org. Maximum capacity is 100, so paid reservations are recommended. The JHMOMC is a tax-exempt organization under Section 501 (c)(3) of the Internal Revenue Code. The Museum is handicapped and assisted-listening accessible.