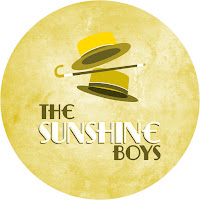 THE SUNSHINE BOYS
by Neil Simon

Directing the production is Keith Baker. Baker serves as the Artistic Director for Bristol Riverside Theatre in Bristol, PA. In addition to directing more than 90 productions with BRT, including the 2018/19 BRT production of Neil Simon’s The Sunshine Boys, Baker served as the cultural ambassador of theatre for the U.S. State Department in Armenia.

As the story goes, Al and Willie as “Lewis and Clark” were top-billed vaudevillians for over forty years. Now they aren’t even speaking. When CBS requests them for a “History of Comedy” retrospective, a grudging reunion brings the two back together, along with a flood of memories, miseries and laughs.

Returning to the Sitnik stage are CSC veterans David Edwards, as Al Lewis, and Emaline Williams, as the Burlesque Nurse. CSC audiences will remember Edwards from such productions as The Learned Ladies, Light Up the Sky, The Mousetrap, The Cripple of Inishmaan, and Bittersuite. Edwards’ extensive credits run the gamut of Broadway, Off-Broadway, Regional Theatre and Film/Television.  Williams was last seen on the CSC stage in productions of Bram Stoker’s Dracula and the world premiere of Hitler’s Tasters.  Williams’ other credits include work with the Dreamcatcher Repertory, Bickford Theatre, The Growing Stage, Alliance Repertory Theatre Company, Vampire Cowboys (NYC) and The Monomoy Theatre (Chatham, MA). Williams will also be returning to CSC for the world premiere production of Turning.

Making their Centenary Stage Company debuts are Jason Silverman, as Ben Silverman, and Reva Jamison, as the Registered Nurse. Silverman was also part of the BRT production of The Sunshine Boys and carries extensive Broadway and Off-Broadway credits, including his work with Roundabout Theatre and Playwrights Horizons. Regionally, in addition to his work with Bristol Riverside Theatre, Silverman has worked with Delaware Theatre Company, McCarter Theatre Center and Asbury Park Boardwalk. He carries a number of film credits, including his supporting work in The Wolf of Wall Street directed by Martin Scorsese. Jamison’s theatre work includes productions with Henry Street Settlement, St. Paul Players, Paul Robeson Theatre, Dillon’s Dinner Theatre, Linden Morningstar Players and local tours of For Colored Girls Who Have Considered Suicide/When the Rainbow Is Enuf and Guys and Dolls. She also carries a number of television, film and album credits.

Rounding out the cast is Centenary Stage Company intern Kevin Wehrhahn, as the Director’s Voice, and NEXTstage Repertory/Centenary University Theatre Students Gabriel Landes, as Eddie the TV Assistant, and Ryan Robert Washington, as the Man/Patient. Audiences will remember Wehrhahn as The Beast in CSC’s most recent holiday production of Disney’s Beauty and the Beast, as well as his recent work in The Merry Wives of Windsor and Jesus Christ Superstar. This is Landes’ second show this season, having been part of CSC’s season opener The Ghost Train. Finally, Washington returns to the CSC stage for the third time this season, having also been part of the season opener The Ghost Train and the holiday production of Disney’s Beauty and the Beast.

Centenary Stage Company’s production of Neil Simon’s The Sunshine Boys is sponsored in part by The House of the Good Shepherd, Heath Village Retirement Community and Fulton Bank.

The 2019-2020 season of performing arts events at the Centenary Stage Company is made possible through the generous support of the Geraldine R. Dodge Foundation, the NJ State Council on the Arts, the Shubert Foundation, the Blanche and Irving Laurie Foundation, the Sandra Kupperman Foundation, Zonta Morristown Chapter and CSC corporate sponsors, including Season Sponsor The House of the Good Shepherd, Heath Village Retirement Community, Silver Sponsors Hackettstown Medical Center with Atlantic Health System, Home Instead Senior Care (Washington), and Fulton Bank, and Centenary Stage Company members and supporters.