WHEN: Wed, Jan 15, 7 pm
WHERE: Kaplen JCC on the Palisades, 411 East Clinton Avenue, Tenafly
TICKETS: open to the public with free admission. 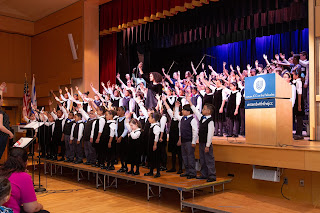 The Young People’s Chorus @ Thurnauer (YPC@T) was established in 2009 as an affiliate of the award-winning Young People’s Chorus of New York City. Both choruses share the mission of bringing children of diverse backgrounds together, to provide a choral experience that emphasizes unique and challenging choral music, fostering cultural understanding and friendship. YPC@T comprises the Prelude and Concert Choirs at the Thurnauer School with partnership choruses at the Grieco and McCloud Elementary Schools and Janis Dismus Middle School from the Englewood Public School District. YPC@T began with 32 choristers and currently has over 150 choristers.

YPC@T is committed to singing a variety of musical genres, including new choral works, opera, gospel, classical and pop. YPC@T has performed at numerous venues including the 92nd Street Y in New York, The Lillian Booth Actors Home, The High-Note Music Festival and the Music in the Parks choral competition. In 2017 and 2018, YPC@T sang at the American Young Voices performance with 8,000 other choristers at the Prudential Center in Newark and won first place and overall best chorus in the Middle School Division at Music in the Parks. Recently, YPC@T made its debut performance at Carnegie Hall as part of the New York Chorus Festival and in December, the YPC@T sang the national anthem at the New York Knicks game in Madison Square Garden.

The JCC Thurnauer School of Music is New Jersey’s leading community music school, serving nearly 500 students from infancy through adulthood. The School, which has been named a Major Arts Institution by the New Jersey State Council on the Arts, offers a comprehensive program similar to the finest pre-college conservatories. The Thurnauer experience includes instrumental lessons, ensembles, and classes, master classes with world-renowned artists; a chamber music series; faculty recitals; and frequent student performances; and a 20+ year partnership with the Englewood Public School District. It is a member of the National Guild for Community Arts Education and received an award for “excellence and high standards” from The Chamber Music Society of Lincoln Center. Enrollment in the school is open year-round. For further information about upcoming events or enrollment, call 201-408-1465.