“The Foreigner" Opens at The Barn Theatre in Montville

The Foreigner takes us to a fishing lodge in rural Georgia. British demolitions expert Froggy LeSuer is here on one of his frequent visits--but this time, he has brought along a friend, the pathologically shy Charlie. Since Charlie is terrified of making conversation with strangers, Froggy introduces Charlie as a foreigner that is unable to speak English, before leaving him alone.

Once alone, Charlie overhears many damaging revelations from the lodge’s other guests, all made under the assumption that Charlie doesn’t understand a single word being said. His understanding fuels the nonstop hilarity of the two-act play. 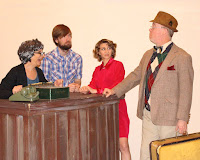 The cast of The Foreigner features Danny Egan of Bloomfield as Owen, Danielle Meola Valencia of Nutley as Catherine, Erika Wynzel of Lake Hiawatha as Betty, Todd Mills of Boonton as Reverend Lee, Austin Munroe of West Nyack as Ellard, Jonathan Rudolph of Parsippany as Froggy, and Charles Grayson of Morristown as Charlie.