The exhibit, featuring the work of three local artists—Sara Holliday, Martha Holmes, and Maria Saidi—examines how these artists represent what they see in the world through their art.

One might call these three artists realists, as they share the goal of representing the world as they actually see it. While their interpretations of the world may not align with more conventional perspectives of what is “real,” it is their shared ambition to capture the play of light in a scene, either as an aspect of a scene or as an independent entity in itself, that distinguishes and animates their work.

These three artists bring different technical and aesthetic sensibilities to their art in order to realize their visions. Holliday uses layered colors combined with sharply defined structures and impressionistically realized settings to examine natural and man-made landscapes. Holmes focuses on exploring and evoking the glowing “orbs” of light that she sees throughout the world. Saidi focuses on portraiture, capturing the effect of light and shadow on her subjects and their environments.
Many of Holliday's paintings focus on Quaker Meeting Houses set within the context of their outer environments in order, paradoxically, to explore the inner world of each one. While Holliday recreates the houses’ exteriors, her paintings nevertheless reveal her attention and respect for the beauty held within.  Holmes’s work examines how orbs of light dance across the room, appearing at times to guide her in conveying emotions. Saidi’s portraits seem to capture her subjects in mid-sentence. She creates this dynamic through the precise placement of her paint. All three artists are raw and real in the expression of their visual experience. It is as if you are given a private viewing into their seeing process. 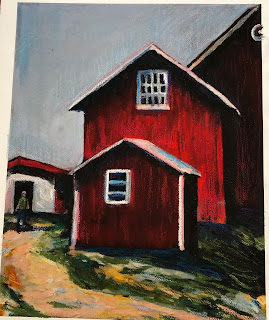 Sara Holliday is a practicing painter and mixed media artist. Originally from Washington D.C., Holliday spent her early years visiting the many art museums which fostered her love of art and art history. She graduated from Wagner College with her undergraduate degree in Arts Administration and a Master’s Degree in Art Education from Teachers College at Columbia University. She taught art for several years in New York City. Before focusing on her teaching and art practices, she worked for a New York graphic design and communications firm. Holliday is a recent transplant to Montclair where she lives with her husband and two children. (Sara Holliday, Oxe and Hill No. 2, 16” x 20” framed, Embellished Giclée print with oil pastel, acrylic paint.) 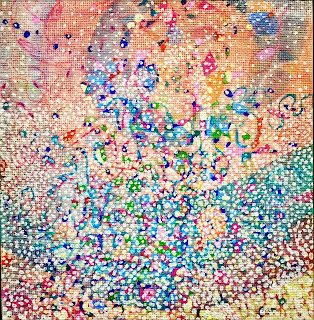 Martha Holmes is primarily a self-taught artist guided by her own intuitive skills. She studied theater and earned a Bachelor of Fine Arts in acting from SUNY at Purchase. She has collaborated with Guy Holmes in writing screenplay, including the film “Anna”, starring Mark Strong and Taissa Farmiga, which premiered at the Sitges Film Festival in Sitges, Spain before going on to wide release in the U.S.  She currently works as a stager for homes be sold in Montclair, Glen Ridge, and Bloomfield, and as a fitness instructor at Platinum Fitness. (Martha Holmes, Untitled, 18’x18”, Acrylic on Canvas) 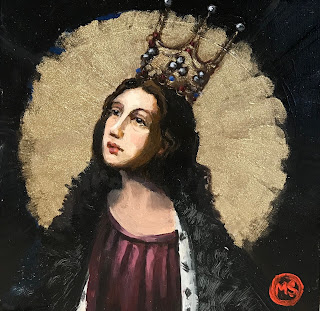 Maria Saidi is a painter and graphic designer. She was born in Manhattan surrounded by some of the top art institutions in the world, and later studied at several of them. Saidi studied at the Art Students League of New York and earned a degree in Fine Arts at Parsons School of Design, where her focus was on painting in the technique of the old masters. In 2015 she turned her love of art to graphic design and founded Oddo-Saidi, a graphic design studio in Montclair, New Jersey. Her paintings have been on view at Lincoln Center’s Cork Gallery, The Aaronson Gallery, The Westside Arts Coalition Broadway Gallery, The Paterson Museum, The Clifton Arts Center and The George Hotel. (Maria Saida, De Monarchia, 3”x3”, Oil on Clay Board)

About the Incubator Program
Studio Montclair’s Incubator Program, directed by Lisa Diamond Rosenthal and Sara Holliday, seeks to mentor new and emerging artists and provide them with a space for what is often their first solo or small group show exhibit.

About Studio Montclair
Studio Montclair Inc. is a nonprofit organization of exhibiting professional artists and others interested in the visual arts. Its mission is to promote culture and education in the visual arts and encourage emerging artists. Founded in 1997, the organization has over 550 members including artists throughout the United States, as well as Europe and Asia. For more information, contact smi@studiomontclair.org, or call 862-500-1447.

About the Academy Square Galleries Directors

Lisa Diamond Rosenthal is a painter and sculptor. She is also the former owner of Montclair’s Nandi School of Art, a local art hub where she employed more than twenty area artists and art teachers to support year-round classes in painting, ceramics, fiber arts, amine, and sewing. Each year, Lisa assists various non-profits by facilitating acquisitions and curating large-gallery art shows for fundraisers. She was recognized by U.S. Congressman Bill Pascrell and the New Jersey Coalition Against Sexual Assault (NJCASA) for raising significant funds for NJCASA’s crisis hotline for women through Montclair’s Rock ‘n’ Art Ball, an event she spearheaded, developed, and oversaw. A graduate of Cornell University, Lisa now owns and operates a life-and-health coaching business in Little Falls, NJ.

Guest Curator Catherine LeCleire was born and raised in the Philadelphia area.  She attended Philadelphia College of Art (University of the Arts) and went on to graduate school at University of Southern California.  While in California she taught at Otis Art Institute, California State University Dominguez Hills and California College of Arts. LeCleire is currently an Adjunct Professor at both Pratt Institute and Montclair State University; she teaches a variety of classes such as Silk Screen, Beginning Printmaking, Book Arts, Painting Processes, and Photo Printmaking. As a bookbinder, she has bound books for Bruce Connor, David Salle, Octavio Paz, Joan Mitchell, James Brown, Janet Taylor Pickett and others.