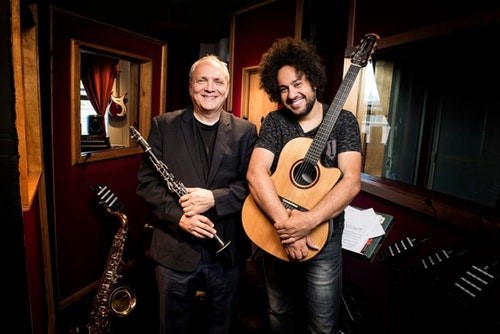 “Diego Figueiredo is one of the greatest guitarists I’ve seen in my whole life. The world needs to listen to his music,” raves fellow legendary guitarist George Benson. Figueiredo’s superb technique, timing and imagination have made him one of the hottest international names to date. His unique interpretation and emotion has impacted fans and concert goers in more the 60 countries around the world.

Mel Torme is quoted as saying, “Since the advent of Benny Goodman, there have been too few clarinetists to fill the void that Goodman left. Ken Peplowski is most certainly one of those few. The man is magic.” Peplowski has recorded over 70 CDs as a soloists and close to 400 as a sideman with some of the most notable names in the music industry. He has headlined the Hollywood Bowl, Carnegie Hall, Birdland Jazz Club, the Blue Note and Dizzy’s Club amongst many other venues.

The 2019-2020 season of Centenary Stage Company’s performing arts events is made possible through the generous support of the Geraldine R. Dodge Foundation, the NJ State Council on the Arts, the Shubert Foundation, the Blanche and Irving Laurie Foundation, the Sandra Kupperman Foundation, and CSC corporate sponsors, including our Season Sponsors the House of the Good Shepard, Heath Village Retirement Community, Hackettstown Medical Center Atlantic Health System, Home Instead Senior Care (Washington), Fulton Bank and Centenary Stage Company members and supporters.