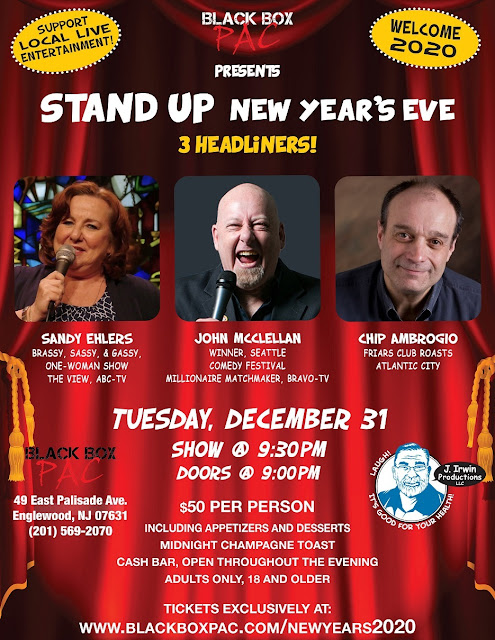 WHEN: Tuesday, December 31
WHERE: Black Box Performing Arts Center (49 E Palisade Ave, Englewood
TICKETS: $50 and include appetizers, desert, and champagne toast! A cash bar will also be available.
Tickets can be purchased at www.blackboxpac.com or at the venue, depending on availability. 18+ only

Ring in the New Year with a stand up special! This night of comedy will feature three headliners: Sandy Ehlers, John McClellan, and Chip Ambrogio. Black Box PAC and J. Irwin Productions, the team that brought Gilbert Gottfried and Uncle Floyd stand up specials to Bergen County, are excited to present this fun and comedic New Years Eve night! This event will kick off a series of high level comedy acts at Black Box PAC in 2020, brought to you through their partnership with J. Irwin Productions.

Sandy Ehlers was born and raised in Hoboken, New Jersey. A twelve-year comedy veteran, Sandy has performed stand-up at many of New York City's major clubs, such as Gotham Comedy Club, New York Comedy Club, Broadway Comedy Club, and The Comic Strip. Sandy's comedy journey began with an appearance on ABC’s The View with Joy Behar in 2003. She has studied Improv at Upright Citizens Brigade in NYC. She was a student of Kendall Cornell’s female clown troop and performed for a Cirque de Soleil cast party in NYC at the Brazilian “Club Pacha” in NYC. Sandy studied two years acting with Joanna Beckson Studios in Manhattan and was selected by the late Albert Maysles to be spotlighted in a weight-loss commercial which was directed by his production company. Sandy has been a contestant in the Cape May Comedy Festival, in which she was a top ten finalist out of 100 comedians and the only female selected as a finalist. Sandy has also been a contestant of the Ladies of Laughter competition at the Gotham Comedy Club this past July 2014. Her comedy is eclectic, funny and eccentric. She's a combination of Joy Behar, Roseanne Barr, and Joan Rivers all rolled up into one. One of the funniest but on-target critiques she's ever gotten was someone telling her she sounded like a female Frank Sinatra when she spoke with her Hoboken accent and her strong conviction of her thoughts and stories, as she takes no prisoners and tells it like it is “her way."

Called “Brutally Funny by the Chicago Sun Times, John McClellan is a grand prizewinner of The Seattle International Comedy Competition as well as a finalist in the San Francisco Comedy Competition and The World Series Of Comedy, McClellan has opened in concert for acts such as David Lee Roth and Collective Soul.. A regular guest on Sirius Satellite Radio, local morning radio and television shows across the nation, John may be most recognizable from his appearance in season 4 of Bravo TV’s “Millionaire Matchmaker” and his show stopping date to NYC’s Museum of Sex, that made that episode one of the most highly rated in the history of the program.

Chip Ambrogio’s comedy career includes performing on the road and all the major city clubs. Chip has been a contributing writer for The Friars Club Roasts and the Hulu Plus project Don't Know Jack. He is co-creator of Room for Improvement, a reality show pilot selected as a finalist at the New York Television Festival. Currently writing for some of today’s top headliners, he's a sought after joke doctor for established acts and top newcomers. As a comic, he has worked Atlantic City, Vegas and a variety of corporate and private events. Before becoming a standup comic, he was the editor and publisher of Commuter Monthly, a humor magazine for New Jersey commuters. He's had several of his short stories published- amongst them, Plastic Jesus and Deep Tux. He has also appeared in the independent films, Secure and Time of Need.