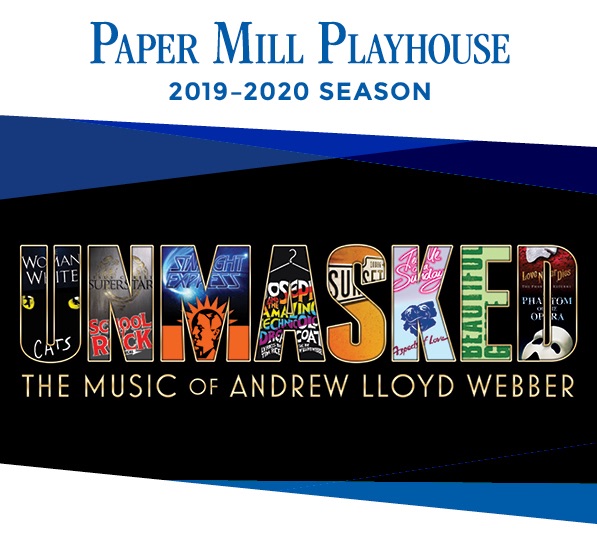 One of the most successful musical theater composers of all time takes audiences behind the scenes in Unmasked, a new musical revue featuring stories and songs from Andrew Lloyd Webber’s remarkable life and celebrated work. Based on his recently released autobiography, this funny and warm musical portrait offers an intimate look at Lloyd Webber’s five decades in the spotlight and beyond, from his quirky family and bohemian youth in London to the creation of such smash hits as Jesus Christ Superstar, Evita, Cats, Phantom of the Opera, and Sunset Boulevard. You’ll hear new and sometimes unexpected interpretations of his best-loved songs, rediscovered gems, and some new material specially written for this production.

Meet the cast who will sing the songs and tell the stories of Andrew Lloyd Webber's remarkable life and celebrated work.

ALYSSA GIANNETTI is thrilled to be performing at Paper Mill Playhouse for the first time! She made her professional debut as the Christine Daaé understudy with the first national tour of Andrew Lloyd Webber’s Love Never Dies.

ANGEL LOZADA is making his Paper Mill Playhouse debut in Unmasked! Favorite credits include Jesus Christ Superstar both live on NBC and at the Lyric Opera of Chicago, Che in Evita at Riverside Theatre and ACT of Connecticut, and Bernardo in West Side Story at Maltz Jupiter Theatre.

MAURICIO MARTINEZ played Emilio Estefan in On Your Feet! on Broadway and on tour. TV: El Vato (International Emmy Award), Señora Acero 2 (Telemundo), and numerous telenovelas for Univision. On the Mexico City stage, he starred in Disney’s Beauty and the Beast, Saturday Night Fever, The Drowsy Chaperone, A View from the Bridge, and others.

MAMIE PARRIS makes her Paper Mill debut. She garnered acclaim as Grizabella in the Broadway revival of Cats and originated the role of Patty in School of Rock. Additional Broadway and tour credits include Wicked (Elphaba), 9 to 5 (Judy), On the Twentieth Century, Ragtime, The Drowsy Chaperone, Legally Blonde, and 110 in the Shade.

ANDREW LLOYD WEBBER (Composer) has composed some of the world’s best-known musicals, including Cats, Evita, Joseph and the Amazing Technicolor Dreamcoat, Jesus Christ Superstar, ThePhantom of the Opera, Sunset Boulevard, and School of Rock. His awards, both as composer and producer, include seven Tonys, seven Oliviers, a Golden Globe, an Oscar, an Emmy, the Praemium Imperiale, the Kennedy Center Honor, and a Grammy. He is passionate about the importance of music in education, and the Andrew Lloyd Webber Foundation is one of Britain’s leading charities supporting the arts and music.