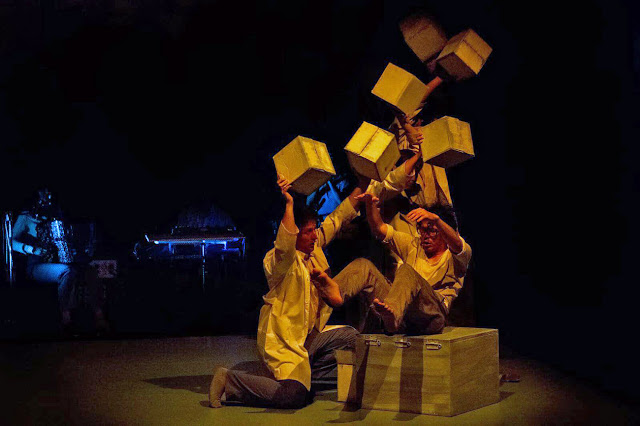 La Caja explores multiple levels of alienation in contemporary society. Martínez suffers from a rare psychic disorder and is undergoing treatment by a medical team of doctors and nurses. As his therapy progresses, the patient gradually becomes lost in an imaginary world, blurring the border separating reality from fiction. As the world becomes more and more ambiguous, a box containing the cure for all evil is discovered. But what is inside the box and why is it so hard to open?

The JCTC presentation of La Caja will be the first time Los Escultores del Aire performs in New Jersey. According to Mai Rojas, Director, La Caja the play is the five-year old company’s most ambitious production yet and its universal themes are well suited to close out New Jersey’s first international theater festival.

“It is a very interactive experience, where the audiences aren’t just watching a show, but rediscovering truths through the eyes of the main character,” said Rojas. “Our musicians, dancers and actors work together to tell one story about broken relationships but also of hope. For us it is very important to talk about truths we all share. We don’t believe in borders. People come to this play from different social contexts, but as human beings, we are all the same. No Matter which country we present La Caja in, every single person understands and connects with the play.”

The Jersey City production is actually the final stop for a tour that included performances in Europe and South America. Although there will be projected subtitles in English, the narrative is mainly conveyed through movement, action and music. For Rojas, having the final shows of La Caja’s current tour close out Voices: International Theater Festival is fitting for a theater company whose cast & crew all hail from different nations, including Spain, Italy, Costa Rica, Panama and Chile.

The 1st annual Voices: International Theater Festival has brought a range of international productions to the black box theater at Merseles Studios. The festival began in August with Jazz Italiano with an intimate concert by IDR_Italian Doc Remix, and featured Watch Now, a Slovakian production and The Truth, from Poland.

“Our audiences have made Voices a successful festival that we can’t wait to bring back next year,” said Olga Levina, Artistic Director, JCTC. “JCTC’s mission is to present progressive theater and arts that tackle the issues of time. La Caja truly explores an issue that is global in scope yet relevant to our community. Our first Voices proved that there’s an audience in Jersey City for professional, cutting edge theater and La Caja is the perfect way to close our inaugural international festival.”