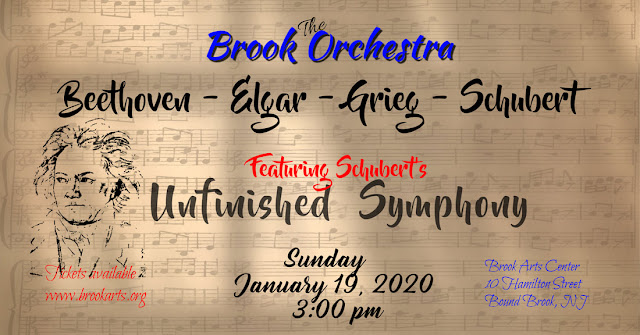 WHEN: Sunday, January 19, 2020, at 3 pm
WHERE: The Brook Arts Center ( Historic Brook Theater) located at 10 Hamilton Street in Bound Brook
Tickets are available at www.brookarts.org or at the door one hour prior to showtime.

Under the direction of Thomas Vacca, the orchestra will present selections by Grieg, Beethoven, and Schubert. The featured piece will be Schubert’s Unfinished Symphony. The concert is Vacca’s debut performance at the Brook; however, he is certainly not new to the wielding of the baton, as he has conducted the Rutgers Sinfonia, Ravina Youth Symphony and the Princeton Charter School Orchestra.

The Brook Arts Center (Historic Brook Theater) located is dedicated to encouraging and nurturing the arts in Somerset County. The Brook Orchestra is the theater's resident orchestra. 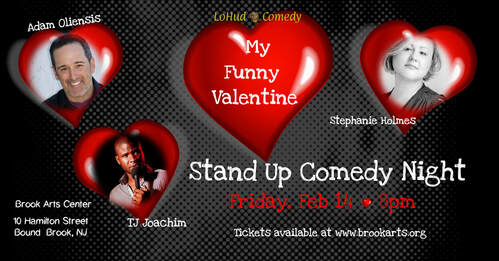 My Funny Valentines—Stand up Comedy Night

WHEN: Friday, February 14, 8 pm. Our doors open at 7 pm, grab a seat, get a drink and laugh with us!
WHERE: The Brook Arts Center ( Historic Brook Theater) located at 10 Hamilton Street in Bound Brook
TICKETS: $20 online at www.brookarts.org . $25 at the door.
Every advance ticket receives a 15% of coupon at Mama Rosina’s Ristorante and Bar. Make your reservation early!

Three of NYC’s most hilarious comedians will take you on a journey of laughter about finding love, being in love, relationships, marriage and more! Bring your sweetheart or enjoy a night out with friends at the Brook Arts Center in Bound Brook, NJ.

Headlined by Adam Oliensis, an actor and comedian whose new album, “Aged Whine” is playing on Sirius XM Radio 99. Adam explores the lessons he’s learning from his wife and especially from his children, along with the adjustments that genuine adulthood is forcing upon his world view.

Tanael Joachim, a standup comedian raised in Haiti, was recently featured on Good Day New York on FOX. Tanael has a very laid back, smooth and conversational style, and he jokes about race, society’s idiosyncrasies and the inherent contrast between life in Haiti and America.

Stephanie Holmes was featured at Caroline's Comedy Club, as a finalist in "The New York's Funniest" Contest for The New York Comedy Festival. She has also recently been featured in Cover Girl's "Stand Up for Beauty" with Aisha Tyler. Stephanie's style of comedy is quirky, insightful, political, and shocking. 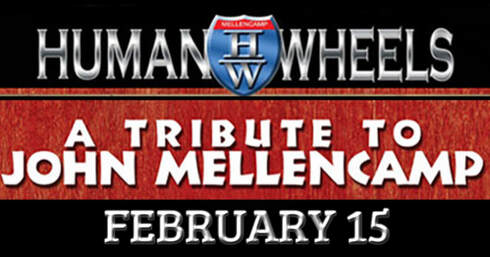 WHEN: February 15 at 8pm
WHERE: The Brook Arts Center ( Historic Brook Theater) located at 10 Hamilton Street in Bound Brook:
Tickets are available at www.brookarts.org.

These seasoned musicians have played such popular venues as BB Kings Blues Club in Times Square, Indiana Live Casino near Indianapolis, (Mellencamp's home turf), and many more across the east coast.  Enjoy classics like Pink Houses, Jack & Diane, Hurts So Good, I Need a Lover, Small Town, R.O.C.K. in the U.S.A., Authority Song, Cherry Bomb, Rain on the Scarecrow, Paper in Fire, Lonely Ol’ Night, and many more!