WHEN: one performance on Sunday, November 10
WHERE: Tim McLoone’s Supper Club, 1200 Ocean Avenue,  Asbury Park
TICKETS: $22 and are available by calling 732-774-1155 or at www.timmcloonessupperclub.com.
For more information, go to www.theboomerboys.com 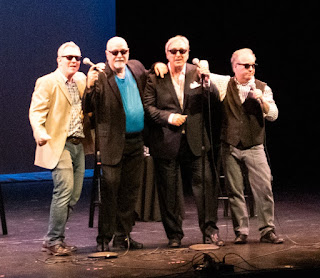 The Boomer Boys features a fun-loving “fat pack” of middle-aged men who navigate everything from the depths of expanding waistlines to the heights of Viagra. With such songs as “My Prostate is the Size of a Buick," "I Just Took a Pill Called Viagra," “My God I Am My Father," "My Get Up and Go Just Got Up and Went," and "Noises in the Night," the Boys laugh about everything from snoring and hair loss to weight gain and lost car keys. (“Wincingly funny!  A laugh from start to finish!” The Journal) 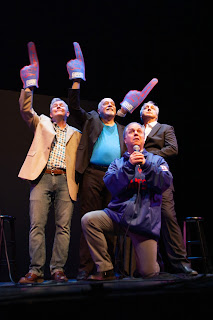 The Boomer Boys sold out its initial performances in New York City’s Upper West Side venue the Triad. The NJ appearance is part of a tour that will take “The Boomer Boys” to Scottsdale, Philadelphia and Boston.

Among the most produced playwrights in the world, Van Zandt and Milmore are authors of 25 plays published worldwide with Samuel French. Their work in television has garnered them Emmy nominations, People Choice Awards, Prism Awards and NAACP Image Awards for such shows as “Newhart” with Bob Newhart, Suddenly Susan” with Brooke Shields, “Martin” with Martin Lawrence, “The Wayans Bros.” and “Daddy Dearest,” which starred comic legend Don Rickles.