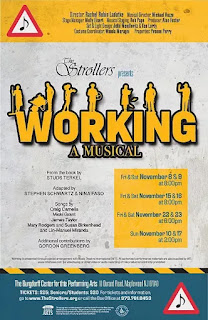 The Strollers community theater will open its 88th season with a presentation of Working: A Musical. This contemporary crowd-pleaser will be performed for three weekends in November.

Based on Studs Terkel’s best-selling book of interviews with the American workforce, Working is a delightfully funny and thoroughly touching musical. It is a both an exploration of the individuals’ occupations and a lament for lost hope and dreams. It takes the viewpoint of an average worker – such as a waitress, a trucker, a housewife, or a fast-food delivery boy – whose life and aspirations reflect the diversity that is America. First staged in Chicago in 1977, Working debuted on Broadway (directed by Stephen Schwartz) the next year; decades later, an update of the show led to the addition of music from artists such as famed Hamilton creator Lin-Manuel Miranda.

The Strollers of Maplewood was established in 1932 "to provide an opportunity for artistic and dramatic education and enjoyment for its members and the community." The troupe’s 88th season will continue with a children’s theater production, How the World Got Wisdom, in late January/early February. Following that will be Lucille Fletcher’s suspenseful mystery Night Watch in March; the season concludes in May with Horton Foote’s heartwarming drama The Trip to Bountiful. Visit www.thestrollers.org or email TheMaplewoodStrollers@gmail.com for more information.