REVIEW: UPDATED “CINDERELLA” MAY LACK SOME MAGIC BUT PLEASES AS HOLIDAY FARE 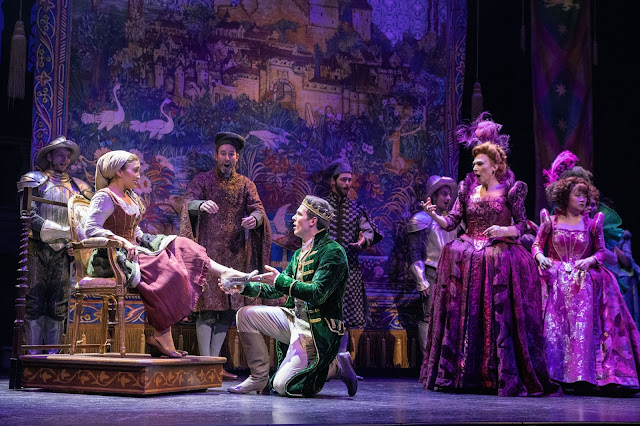 Will the real Rodgers + Hammerstein’s Cinderella please stand up?

Is it the original 1957 70-minute television version with a book by Oscar Hammerstein III and starring Julie Andrews, reborn again in 1965 as a film starring Lesley Ann Warren? Is it the teleplay of multi-ethnic 1997 Disney adaptation written by Robert L. Freedman? Or is it Tom Briggs’ interpretation of the venerable tale produced by the Paper Mill Playhouse in 2005?

The answer: None of the above.

For its 2019 holiday offering, the Playhouse has chosen a more contemporary script penned by Douglas Carter Beane for the 2013 Broadway production. This iteration has turned Cinderella into an advocate for the poor; added a ranting social rebel named Jean Michel; given one of her ugly stepsisters a social conscience; and inserted modern slang expressions into the dialogue (e.g., when asked during the wedding how she’s feeling, Cinderella answers, “I’m good”). While such updates may please younger, more hip audiences, they bloat the plot (Cinderella has to go to the palace twice—once for a ball, again for a banquet—before she can lose that iconic glass slipper and the Prince can search for the foot to fit it). By the time the wedding rolled around, the little girl in front of me had fallen asleep and my eyes were closing too. 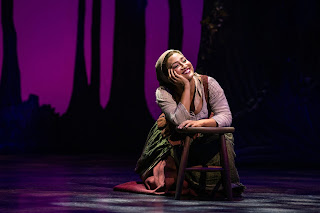 In its simplest form, the ancient plot concerns Cinderella (left, Ashley Blanchet), who, forced into a life of servitude by her cruel stepmother, dreams of a better life. With the help of her Fairy Godmother, the young woman is magically transformed into an elegant young lady and is able to attend the ball to meet her Prince. Rushing out at the stroke of midnight, when the spell will be broken, Cinderella drops her glass slipper. The Prince finds it and scours the kingdom to find the one girl whose foot it will fit. The two wed and “live happily ever after.” 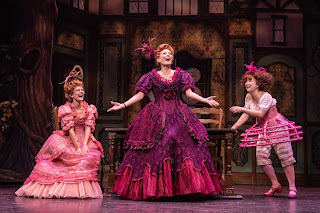 Three women—Cinderella, Madame and Crazy Marie—stand at the center of this beautiful production. Ashley Blanchet’s Cinderella is kind to all, even as she sits dreaming alone in her “own little corner of the world.” Her lovely voice expresses the lushness of Rodgers’ melodies and the clever lyrics by Hammerstein. She’s especially winning in a duet sung with Prince Topher (Billy Harrigan Tighe) ten minutes after they’ve met and the glorious ballad “Do I Love You Because You’re Beautiful.” Hoty (center, above) is an appropriate imperious, self-absorbed, social-climbing stepmother, ordering Cinderella around 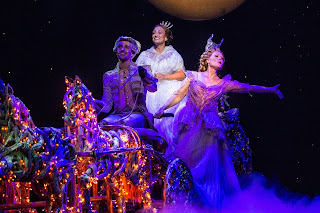 and seeking every social advantage for her annoying daughters (Angel Lin (right)  is especially obnoxious, on purpose, as Charlotte, while Rose Hemingway (left) is a more retiring, sweeter Gabrielle). And as Crazy Marie (aka the Fairy Godmother) English (left, with Blanchet in the magic coach) is an appropriate cheerleader for her charge, showing that the impossible can be come possible and that “There’s Music in You.” 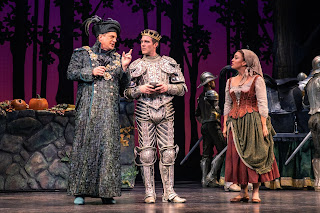 Tighe is an insecure princeling, unsure of who he is or if he’s ready to assume the throne. Christopher Sieber (right, with Tighe and Blanchet) is oily as the manipulative, villainous prime minister Sebastian, the Regent who is loath to give up the powers he’s exercised until Topher comes of age and who has duped his charge into approving oppressive legislation. And Andrew Boyd (below) is the very loud and annoying new character, the rebel Jean Michel, whose loud, screechy rants against the government don’t win him much sympathy from the audience. 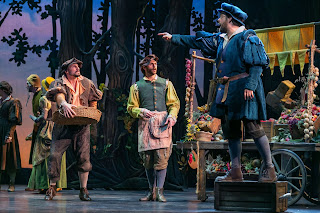 The large ensemble nimbly performs JoAnn M. Hunter’s choreography, even with its odd-looking Egyptian hand positions. Anna Louizos’s beautiful scenic design takes us from the forest to the palace smoothly, and William Ivey Long’s costumes are eye-popping, with neon tights on the women of the court and a riot of color worn by women and men alike. Transforming Marie into a Fairy Godmother and Cinderella into a Princess occurs in the wink of an eye much to the audience’s surprise. And while some of the other special effects (the pumpkin becoming a coach, the mice turning into the horses) are magical, they don’t match the breathtaking effects of the 2005 production. 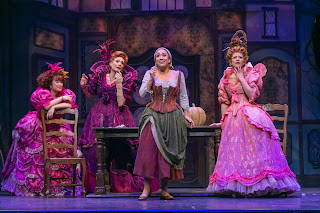 PMP Artistic Director Mark S. Hoebee has directed with a steady hand, but the bloated plot means that the performance, originally 70 minutes in 1957, now clocks in at over two hours. Despite its flaws, Rodgers + Hammerstein’s Cinderella is the perfect confection for the holiday season. You’ll do well to take your own little princesses to the Paper Mill Playhouse for a dose of magic. (Right: Cinderella and here stepmother and stepsisters contemplate the Prince’s ball.)

Rodgers + Hammerstein’s Cinderella will be performed at the Paper Mill Playhouse, 22 Brookside Drive, Millburn, through December 29. For information and tickets, call the box office at 973.376.4343 or visit www.PaperMill.org.