REVIEW: “MY LIFE ON A DIET” TREATS SERIOUS PROBLEM WITH HUMOR 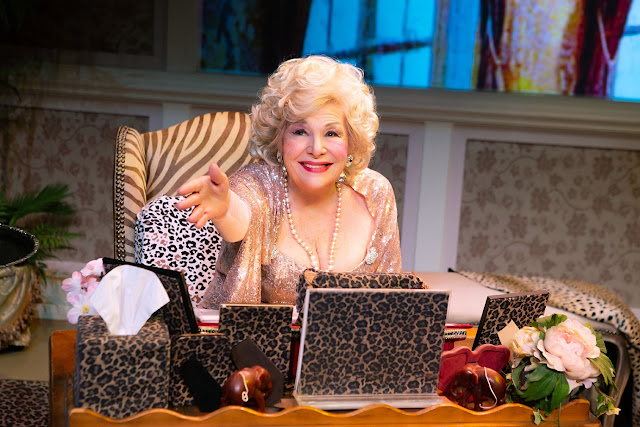 For the second production of their inaugural season at the New Brunswick Performing Arts Center, the George Street Playhouse has chosen a rather odd piece of theater: Renée Taylor’s autobiographical one-woman show, My Life on a Diet. Based on a memoir she wrote in 1986 with her late husband Joseph Bologna, the piece is more memoir than play. Although it does have a plot of sorts—tracing Taylor’s trajectory from her childhood as chubby Renée Wexler to an Emmy Award-winning performance as Fran Dresher’s overweight mother on The Nanny— her halting, breathy recitation delivered from a chair as slides are projected on a large screen at the back of the stage robbed the play of vitality.

Now in her late eighties, Renée Taylor has trouble walking and, I’d assume, difficulty remembering the large number of lines delivered in a one-woman show. To counter this problem, she reads from a large book, making no effort to disguise the fact that she’s actually reading text. Her attempt to adjust the pillows behind her (until, finally, one fell on the floor) and to maneuver a foot stool that had been placed too far forward were distracting. And because Taylor stays seated, reading, the production feels static, making the 90-minute show feel slow. 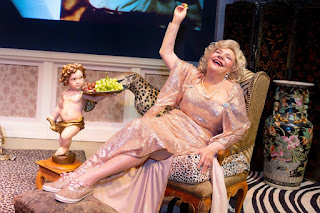 That said, there are some redeeming qualities to the show. The tale, centered around a weight problem (sometimes more perceived than actual) that she attempts to solve with a myriad of fad diets is funny, personal and, ultimately, poignant as it reveals the source of Taylor’s need for love, audience and industry appreciation, and success. Taylor rarely departs from reading the script, but when she does (as in a hilarious account of her honeymoon), we get a glimpse of her once-great comedic talent. She often makes unabashed fun of herself, letting us in on the joke.

As Taylor looks back on her long career in Hollywood and on Broadway, she regales us with juicy anecdotes illustrated with slides of her childhood, her parents, the actors she met and worked with, and her meeting and marriage to Joseph Bologna. She recounts weight-loss tips from such stars as Grace Kelly, Cary Grant, Marilyn Monroe and Joan Crawford. She thought if she could eat like a star, she’d be one.

Her childhood was fraught with ambition and insecurity. The child of two show biz wannabes, she was pushed to live vicariously for her parents. Her father moved the family around the country, one step ahead of the debt collector. Her mother Frieda’s obsession with weight (and celebrity) led Renee to become a self-described “diet tramp”—"someone who eats around.”

In her pursuit of fame, Taylor attends the American Academy of Dramatic Arts, lands a starring role in a play that closes after one performance and gets work in television (weekly appearances on Jack Paar’s Tonight Show and later on Perry Como’s Kraft Music Hall). At the Actors’ Studio in the fifties, she befriends Marilyn Monroe whose grape diet (some of the frozen) isn’t successful, but her love for Marilyn is poignant and revealing.

Many of these anecdotes are funny and delivered with good comedic timing. The feeling that she is unlovable, doomed to failure and always fat (no matter what the scale says) is, however, very sobering. That she meets and marries Bologna (their union lasted 53 years) saves her. And her real-life obsession with food was the impetus for her final role on The Nanny that garnered her an Emmy nomination!

Underneath the comedy, My Life on A Diet is a ringing indictment of show business’s preoccupation with weight and appearance, similar to the situation addressed in the recent film about Judy Garland starring Renée Zellweger.

Renée Taylor had a career spanning over six decades. I recall seeing her on television when I was a kid, and I was familiar with many of the diets she tried. While it was kind of fun to revisit the highlights of her career, I felt more sad than entertained, from her story and her delivery. If you like nostalgia (and are old enough to have lived through the 50s, 60s and 70s when Renée Taylor was a star), you’ll be entertained. It’s not a play for the young: The four Rutgers University students seated in front of me played on their cell phones the entire time.

My Life on a Diet will be performed at the George Street Playhouse in the beautiful New Brunswick Performing Arts Center, 11 Livingston Ave., New Brunswick, through December 15. For information and tickets, call the box office at 732.246.7717 or visit www.GeorgeStreetPlayhouse.org online.