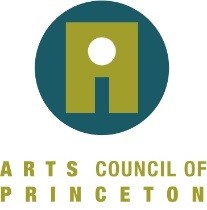 The Arts Council of Princeton (ACP) announces that work is now underway on the mural entitled Journey, located at John Street and Leigh Avenue. Lead artist, Marlon Davila, who grew up in the Witherspoon-Jackson neighborhood is the ACP’s Fall 2019 Anne Reeves Artist-in-Residence, bringing his art to life on the exterior wall of La Lupita Groceries.

The Arts Council invites the public to attend a community reveal party on Saturday, November 9 ,from 10-11am for a formal dedication by Mayor Liz Lempert and light refreshments. 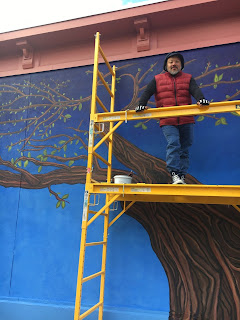 Marlon Davila (left) is a first generation Guatemalan who was born and raised in Princeton. He studied Fashion at the Art Institute of Fort Lauderdale, Florida and continued his education in Fine Arts and painting at Mercer County Community College (MCCC). Davila graduated from MCCC with honors and was awarded the Jack Harris Memorial Scholarship for his excellence in Fine Arts. In May, 2017, he attended Art Escape Italy, a workshop led by Hendrik Uldalen which further honed his love of painting. He recently completed the Artists Teaching Art program at the Arts Council of Princeton and is now teaches art for children at the Paul Robeson Center for the Arts.

Davila’s main goal is for his art is to open people’s eyes to other perspectives on life and the world that we all share. His artwork is influenced by nature, romanticism, surrealism, and the use of symbols as representation of an idea. His bold use of color is a direct link to his Mayan ancestry as is his knowledge of fashion, culture and above all, love.

“I remember being a kid that loved coloring books and drawing. Years later, I still have that same passion for art, and I am creating a mural on this beautiful wall in my hometown on the exact street where I lived for many years,” said Marlon Davila. “It’s incredibly meaningful for me to give back to my community and I am truly grateful to the Arts Council of Princeton and its supporters for believing in me and for giving me this unique opportunity.”

This project would not be possible without the support of Timothy M. Andrews, a longtime friend and supporter of the Arts Council of Princeton, who has generously underwritten the Anne Reeves Artist-in-Residence program for the next three years.

Andrews’ generosity will enable two artists every year to each produce a work of art - mural, a sculpture, whatever they envision. According to Andrews, “At least three of the six will be conceived for a specific public space and created after we gain neighborhood approvals and raise additional funds to pay for the preparation, supplies, and installation.”  The Arts Council of Princeton also acknowledges mural sponsors Kucker Haney Paint Co., Studio Hillier, Jerry’s Artarama Retail, and Smith Ace Hardware Princeton for their support of public art in Princeton.

After an initial meeting with the Historic Preservation Commission regarding the proposal for Davila’s mural, the ACP hosted a neighborhood meeting as well as attending two additional Witherspoon-Jackson  Neighborhood Association meetings, to reach a positive consensus for the project. The Witherspoon-Jackson neighborhood is a diverse and thriving place which honors its past as well as planning and ‘listening’ for a vibrant future where all are included.

The Anne Reeves Artist-in-Residence Program, named after ACP Founding Director, was established by the Arts Council in 2009 to offer artists the opportunity to conceptualize and create new works while providing the community with creative interaction with working artists in all disciplines.

For more information about the Journey mural or and the Anne Reeves Artist-in-Residence program, visit artscouncilofprinceton.org.

The Arts Council of Princeton, founded in 1967, is a non-profit organization with a mission of building community through the arts. Housed in the landmark Paul Robeson Center for the Arts, designed by architect Michael Graves, the ACP fulfills its mission by presenting a wide range of programs including exhibitions, performances, free community cultural events, and studio-based classes and workshops in a wide range of media. Arts Council of Princeton programs are designed to be high-quality, engaging, affordable and accessible for the diverse population of the greater Princeton region.