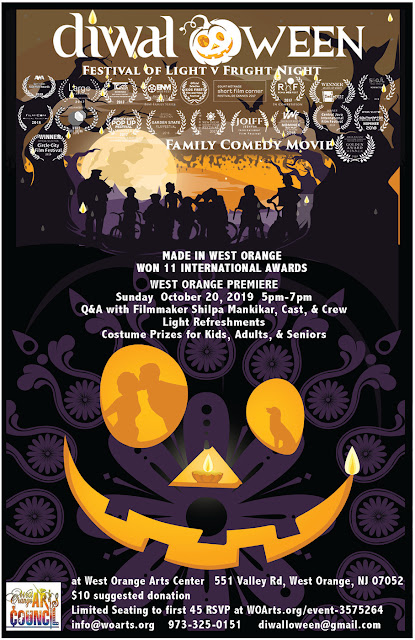 DIWAL'OWEEN—FESTIVAL OF LIGHTS VS. FRIGHT NIGHT: A FAMILY COMEDY FILM

WHEN: Sunday, October 20, 2019, beginning at 5:00 PM
WHERE: West Orange Arts Center at 551 Valley Road in West Orange
ADMISSION: There is a $10 suggested donation, and the event is free for children 12 years and under.
Seating is limited to the first 45 registrants.
Register online at woarts.org

West Orange Arts Council (WOAC) invites the community to the West Orange Premiere of "Diwal'Oween” a family comedy and winner of 11 Awards from Bali to Baltimore.

Shilpa Mankikar,Award-winning American filmmaker, documentarian, director and writer, and a graduate of Oberlin College and the MFA Film Program at Columbia University in New York, NY, filmed many scenes from the movie with local student talent on location in South Mountain Reservation and New Jersey locations.

Mankikar is based in New York, Los Angeles, &  Mumbai. Diwal'Oween is the winner of 11 Awards including the Best Family Series at Baltimore New Media WebFest, the Audience Award, and Best Actor at Jersey City Halloween Popup Fest, and 2nd Place web content at the New Delhi (India) Short Film Awards. It was nominated for Best Family Series and Best Diverse Content at Toronto Webfest, and Best Web Content at the Largo Awards  in Switzerland.

This program is made possible in part by funds from the New Jersey State Council on the Arts/Department of State, a Partner Agency of the National Endowment for the Arts and administered by the Essex County Division of Cultural and Historic Affairs.

For more information about the event visit www.woarts.org or email info@woarts.org.