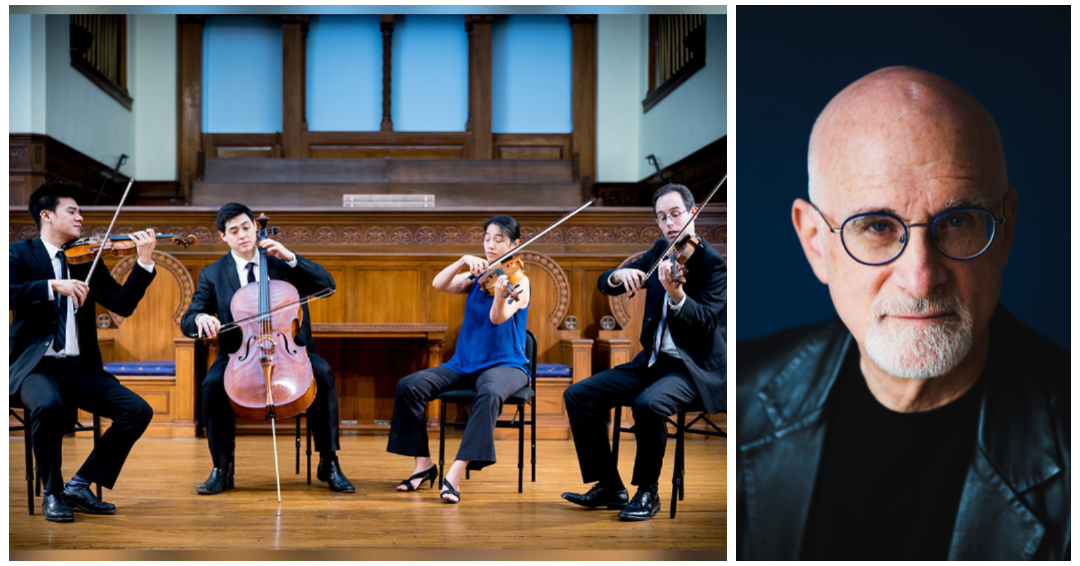 Wave Upon Wave
by Robert Sirota

WHEN: Sunday, November 3, 2019 at 2pm
WHERE: Bickford Theatre at the Morris Museum | 6 Normandy Heights Road | Morristown, NJ
Tickets and information: www.morrismuseum.org or by phone at 973.971.3706, or in person at the Morris Museum. The Morris Museum’s Bickford Theatre is located at 6 Normandy Heights Road in Morristown, NJ, and offers free parking and full accessibility. Box office hours for phone sales are Monday through Friday, 10am to 5pm.
Telegraph Quartet: www.telegraphquartet.com
Robert Sirota: www.robertsirota.com

The San Francisco-based Telegraph Quartet, winner of the 2016 Naumburg Chamber Music Award, joins forces with composer Robert Sirota for a performance presented by the Live Arts Series at the Morris Museum (6 Normandy Heights Road) in Bickford Theatre. This concert is part of Sirota @ 70, a celebration throughout the 2019-2020 concert season featuring residencies, performances, and premieres in honor of the composer’s 70th birthday.

Sirota’s Wave Upon Wave was commissioned by The Walter W. Naumburg Foundation for the competition winners and premiered by the Telegraph Quartet on February 6, 2018 at Carnegie Hall’s Weill Recital Hall. Wave Upon Wave is the third string quartet in a trilogy spanning fifteen years, which Sirota began in 2002 with Triptych, an extended meditation on 9/11. Sirota’s second string quartet, American Pilgrimage, celebrates the rich diversity of the American landscape and the American spirit, and was completed in spring 2016.

Sirota says, “Each of the string quartets in my trilogy is in essence a long journal entry reflecting a response to our times. Now, given the uncertainty of this moment in our history, rife with threats of tyranny, environmental catastrophe, and the human potential for evil, I find myself turning inward to examine the topography of the human heart: our vast potential for creative energy, idealism and altruism. Wave Upon Wave is about our fears, our hopes, and our prayers that we will triumph over the forces of darkness which threaten to overwhelm us.”

Robert Sirota will participate in a discussion about his work after the performance. In addition, the Telegraph Quartet will perform Bartok’s String Quartet No. 4 and Haydn’s String Quartet in F Major, Op. 77, No. 2, for a program that showcases crowning achievements of string quartet repertoire spanning multiple eras.

The Telegraph Quartet (Eric Chin and Joseph Maile, violins; Pei-Ling Lin, viola; Jeremiah Shaw, cello) formed in 2013 with an equal passion for the standard chamber music repertoire and contemporary, non-standard works alike. Described by the San Francisco Chronicle as “…an incredibly valuable addition to the cultural landscape” and “powerfully adept… with a combination of brilliance and subtlety,” the Telegraph Quartet was awarded the prestigious 2016 Walter W. Naumburg Chamber Music Award and the Grand Prize at the 2014 Fischoff Chamber Music Competition. The Quartet has performed in concert halls, music festivals, and academic institutions across the United States and abroad, including New York City’s Carnegie Hall, San Francisco’s Herbst Theatre, the San Francisco Conservatory of Music’s Chamber Masters Series, and at festivals including the Chautauqua Institute, Kneisel Hall Chamber Music Festival, and the Emilia Romagna Festival. The Quartet is currently on the chamber music faculty at the San Francisco Conservatory of Music as the Quartet-in-Residence.

In 2018 the Quartet released its debut album, Into the Light, featuring works by Anton Webern, Benjamin Britten, and Leon Kirchner on the Centaur label. The San Francisco Chronicle praised the album, saying, "Just five years after forming, the Bay Area’s Telegraph Quartet has established itself as an ensemble of serious depth and versatility, and the group’s terrific debut recording only serves to reinforce that judgment." AllMusic acclaimed, “An impressive beginning for an adventurous group, this 2018 release puts the Telegraph Quartet on the map.”

Beyond the concert stage, the Telegraph Quartet seeks to spread its music through education and audience engagement. The Quartet has given master classes at the San Francisco Conservatory of Music Collegiate and Pre-College Divisions, through the Morrison Artist Series at San Francisco State University, and abroad at the Taipei National University of the Arts, National Taiwan Normal University, and in San Miguel de Allende, Mexico.

Over five decades, composer Robert Sirota has developed a distinctive voice, clearly discernible in all of his work – whether symphonic, choral, stage, or chamber music. Writing in the Portland Press Herald, Allan Kozinn asserts: “Sirota’s musical language is personal and undogmatic, in the sense that instead of aligning himself with any of the competing contemporary styles, he follows his own internal musical compass.”

Robert Sirota’s works have been performed by orchestras across the US and Europe; ensembles such as Alarm Will Sound, Sequitur, yMusic, Chameleon Arts, and Dinosaur Annex; the Chiara, American, Telegraph, Ethel, Elmyr, and Blair String Quartets; the Peabody, Concord, and Webster Trios; and at festivals including Tanglewood, Aspen, Yellow Barn, and Cooperstown music festivals; Bowdoin Gamper and Bowdoin International Music Festival; and Mizzou International Composers Festival. Recent commissions include Jeffrey Kahane and the Sarasota Music Festival, Cathedral Church of St. John the Divine, Palladium Musicum, American Guild of Organists, the American String Quartet, Alarm Will Sound, the Naumburg Foundation, yMusic, and arrangements for Paul Simon. Commissions for Sirota@70 in honor of his 70th birthday include works for Thomas Pellaton, Carol Wincenc, Linda Chesis & the Cooperstown Summer Music Festival, and Sierra Chamber Society.

Recipient of grants from the Guggenheim Foundation, United States Information Agency, National Endowment for the Arts, Meet the Composer, and the American Music Center, Sirota’s works are recorded on Legacy Recordings, National Sawdust Tracks, and the Capstone, Albany, New Voice, Gasparo and Crystal labels. His music is published by Muzzy Ridge Music, Schott, Music Associates of New York, MorningStar, Theodore Presser, and To the Fore.

A native New Yorker, Sirota studied at Juilliard, Oberlin, and Harvard and divides his time between New York and Searsmont, Maine with his wife, Episcopal priest and organist Victoria Sirota. They frequently collaborate on new works, with Victoria as librettist and performer, at times also working with their children, Jonah and Nadia, both world-class violists. For complete information, visit www.robertsirota.com.

Founded in 1913, the Morris Museum is an award-winning, multifaceted arts and cultural institution serving the public through its exhibitions and performances which strive to interpret the past and discover the future through art, sound, and motion. The Museum is home to the historic and internationally-significant Murtogh D. Guinness Collection of Mechanical Musical Instruments and Automata. Changing exhibits of contemporary content further illuminate its Permanent Collection. The Museum’s Bickford Theatre is a 312-seat performing-arts facility, offering unique programming in film, jazz, and live performance through its innovative series, Live Arts at the Morris Museum. The Morris Museum has a proud tradition of meaningful educational programs and family events. New Jersey’s only Smithsonian Affiliate Museum, Morris Museum is also the first museum in New Jersey to be accredited by the American Alliance of Museums, it has been designated a Major Arts Institution and has received the New Jersey State Council on the Arts’ Citation of Excellence, among other awards.