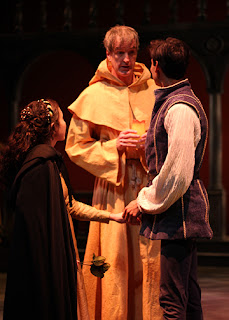 The old adage, “The path to true love never does run smooth,” will continue to be true as long as there are irresponsible adults who abdicate their civic and parental duties and impetuous teenagers who attempt to get around the “system.” That it has held true for centuries speaks to the success of one of William Shakespeare’s earliest tragedies, Romeo and Juliet, written at the beginning of his career and a staple of high school English classes and various film and stage versions that nod to pop culture. (Left: Matt Sullivan, as Friar Lawrence, marries Romeo and Juliet, Miranda Rizzolo and Keshav Moodliar)

The Shakespeare Theatre of New Jersey mounts a production of Romeo and Juliet every 10 years (1999 and 2009), but its current offering fails to honor the Bard’s beautiful poetry and the true tragedy: the collateral damage of a senseless familial feud, the cause of which is never explained and most probably has been forgotten. 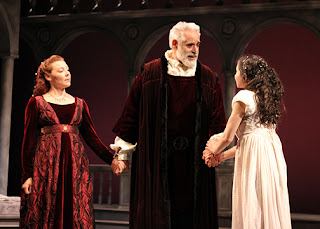 By now, everyone knows—or should know—the story of these “star-cross’d lovers.” Romeo Montague, rejected in love by the fair Rosaline, crashes a party and falls hard for the not-yet-fourteen-year-old Juliet Capulet, daughter of his father’s sworn enemy. The two children pledge eternal love and, with the aid of a sympathetic friar, marry, only to have Romeo banished to Mantua for his role in a street brawl in which his best friend Mercutio and Juliet’s cousin Tybalt are killed. In an attempt to thwart her father’s directive to wed Count Paris, the grieving Juliet, swallows a potion to give her the appearance of death and is buried in the family tomb, with plans to awaken in time for Romeo’s return to Verona to claim her. Unaware of the scheme, Romeo kills himself upon discovering her cold corpse, and Juliet, finding her dead husband sprawled on the floor of the tomb, uses his dagger to commit suicide, thus meting out to the warring Montagues and Capulets the harshest punishment of all: the loss of their children and heirs to their names. (Above, right: Mark Elliot Wilson with Erin Partin and Miranda Rizzolo)

In his debut, Director Ian Belknap keeps the action moving at a steady clip, with no dead spots or slow patches. However, the actors’ rapid recitation of their lines makes appreciating Shakespeare’s beautiful language difficult, and the romance feels glossed over, especially in the scene where Romeo and Juliet discover the wonder of love or Mercutio’s manic but lyrical speech about Mab, the Faerie Queen. Likewise, as Romeo begins his exile in Mantua, the young lovers’ departure dilly-dallying feels rushed and lacks the appropriate chemistry of two children way in over their heads. 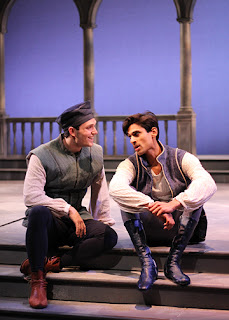 Keshav Moodliar’s Romeo (Right, with Hickox-Young) is coltish, difficult to contain as he rides the waves of his unbridled emotion. Isaac Hickox-Young’s Benvolio works tirelessly, first to find a more likely girl than the fickle Rosaline and later, to control hotheaded Mercutio (Joshua David Robinson) and Romeo, both of whom throw caution to the winds in the confrontation with Torsten Johnson’s contentious, ready-to-rumble Tybalt. Matt Sullivan’s Friar Lawrence was a bit too subdued, especially for one who hopes to bring an end to the feud through the forbidden marriage, and Michael Dale played Lord Montague a bit too nonchalantly. 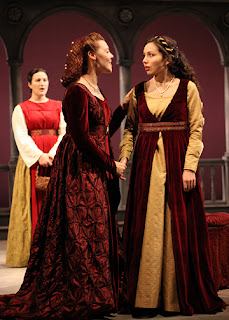 Erin Partin (left, with Miranda Rizzolo) is a cold, distant Lady Capulet, who leaves childrearing to the bawdy Nurse (Aedin Maloney) while Mark Elliot Wilson’s Lord Capulet is scary when raging at a recalcitrant daughter who refuses to follow his orders to wed Count Paris (Ryan Woods). Miranda Rizzolo as Juliet is lovely, although she rushes her speeches (e.g., “Romeo, Romeo, wherefore art thou Romeo) to such an extent that the wonder of falling in love for the very first time was lost.

Lee Savage’s stark Renaissance Verona set is features arches across the back of the stage flanked by a tower on each side. Michael Giannitti’s lighting marks the passage of time over the four days covered by the plot, and Paul Canada has designed opulent costumes. The fight scenes, directed and choreographed by Rick Sordelet (below, Torsten Johnson and Joshua David Robinson), are graceful and exciting, and original music composed by Fabian Obispo adds just the right touch of atmosphere to the goings on. 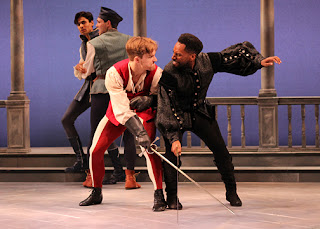 Ten years ago, in a review of STNJ’s Romeo and Juliet, I wrote, “The loss of these two lives of promise, the loss of joy and innocence, has ramifications for modern adults. Racial/religious animosities, the ready availability of guns, the current school shootings and rumors of imminent terrorism point to a loss of innocence in our own society.” Unfortunately, irrational and volatile hatred are societal hallmarks today, making the old saying, “The more things change, the more they stay the same,” sad but true. I just wish that, this time out, the Bard’s poetry soared higher in a production more worthy of this great theatrical troupe.

Romeo and Juliet will be performed on the Main Stage of The F.M. Kirby Shakespeare Theatre, 36 Madison Ave., Madison through November 17. For information and tickets, call the box office at 973.408.5600 or visit www.ShakespeareNJ.org online.