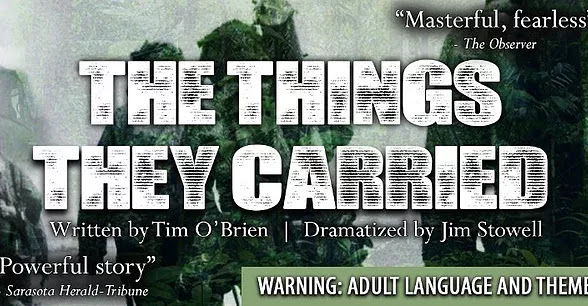 For an entire generation that may be the most fraught of all words.

The audience for The Things They Carried opening night, Thursday, Oct. 24, in the Lackland Performing Arts Center’s black box theatre at Centenary University ranged from people in the pre-Vietnam generation to students who had no first-hand knowledge of the war. They were all brought In Country by David Sitler’s one-man show.

Stitler, a veteran of many productions at Centenary, said he first auditioned for the role at the Florida Studio Theatre and then was invited to do it in Washington, DC. He approached Centenary Stage Company Artistic Director Carl Wallnau who immediately green-lighted the project for the 2019 Fringe Festival.

Stitler is not a Vietnam vet himself, but he is close enough to the generation of soldiers to have that certain understanding that the next generation couldn’t possible have. But, he brought it to them.

The set is spare. A desk in front of a bookcase. There are books, photographs and mementos on the shelves. Stitler walks in wearing a baseball cap which he removes and hangs next to a green poncho. The poncho becomes many things during the story. 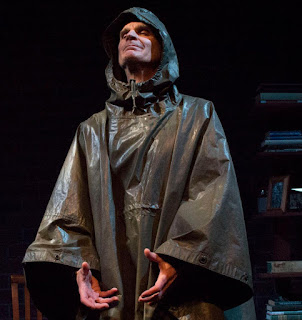 The Things They Carried is, literally, about the things the soldiers carried, physically and emotionally. Stitler, as O’Brien, recites the details and weights of everything each soldier carries – the medic, the radioman, the lieutenant. As the story progresses, the details and weight of the emotions becomes clear.

While most of the story is about O’Brien’s time in Vietnam, he does detail his aborted defection from a meat-packing plant in Minnesota to a fishing camp on the Canadian border. That is part of the Vietnam story as well.

This reviewer is not one to bring herself into the review, but this time I have to.

I don’t want to detail too much of the story because I believe it should be brought to the audience raw, unflavored, untouched. And it is raw and it is incredibly powerful.

Yes, it is gory in places, but this is not a “trigger warning.” There were no warnings to the boys who got there as teenagers. The audience needs to hear the horror, to visualize it. Because that is war.

For this reviewer who knew boys who went to Nam, who baked cookies for a Marine unit, who lost a dear friend recently to an Agent Orange cancer, who has seen friends fight PTSD, who could look out my attic window and watch the growth of Henry’s Tree during my children’s early childhood – it was planted in memory of a young Army medic who dated one of my friends in high school – the play was personal.

I can’t even imagine how personal it is for the boys who shared O’Brien’s experiences, for the wives they came home to, for the widows they didn’t come home to. But, I do know this is an important play, an important story.

As a unit of the Fringe Festival, it only runs through Sunday, Oct. 27, but see it if you can. And if you can’t see it at Centenary, see it someplace. Stitler wants to take it into New York. I have a feeling he will because many people need to see it, to experience it. This is the story of a generation. And this is the story of every generation that knows war.

And that is every generation.