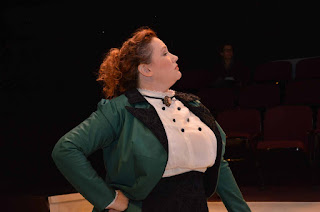 Chester Theatre Group premiered this weekend Lucas Hnath's A Doll's House Part 2, directed by Sky Spiegel Monroe. (It will play until November 3, 2019 at The Black River Playhouse in Chester, NJ.

A Doll's House Part 2 is Hnath’s clever and powerful sequel to Ibsen’s 1879 groundbreaking masterwork, A Doll's House. Ibsen, of course, was the major Norwegian playwright of the late 19th century famous for introducing to the European stage a new order of moral analysis of a severely realistic middle-class. It was hugely controversial, however, today it is one of the most widely produced plays in the world.

The play picks up after A Doll's House concludes. Hnath begins his play with a knock on the door — the same door that was slammed shut fifteen years earlier when Nora exited leaving her husband and three children at the end of Ibsen’s play. It is Nora, the liberated woman, who is knocking. What is the reason for her return?…how does her family and community greet her return? (she was assumed dead) …what has she been doing for all these many years?

To explain these questions would take away your enjoyment of this fascinating take on Nora’s dilemma.

This an excellent play, with strong characters that presents a view of marriage and family life that may make some uneasy, or even unsympathetic—to Nora in particular. She made decisions that were shocking in 1878, that today are better understood…or are they? To show how time has not altered the conditions, modern day expressions, and even props are cleverly incorporated in the play. Director Sky Spegiel Monroe reminds us in her Director’s notes that “women are still struggling for equal legal and social rights and redefining femininity. There is a timelessness to the central themes of this play, and our staging, peppered with anachronism and mild ambiguity is intended to reflect as much.”

Beyond being a powerful, thought provoking play, it is the excellent, pro level, performances of the cast of four that demand attention. Sarah Henley (top photo), a newcomer to the Black River Playhouse, is fine as Nora. This is a tough role since the audience struggles to be sympahtic to the character who challenges their lifestyle. Playing, Torvald, Nora’s abandoned husband, is one of our finest character actors, a man who could grace any stage, Kevern Cameron. He beautifully presents a strong yet sympathetic Torvald.  The part of their daughter Emmy is played nicely by Amanda Marino. As part of the timelessness theme, she is not dressed in a late 19th century costume, but instead is wearing contemporary street clothes. The fourth impressive player is Kate Lyn Reiter as the housekeeper/nanny. She is simply spot-on as Ann Marie.

The play is presented in 90 minutes without an intermission.