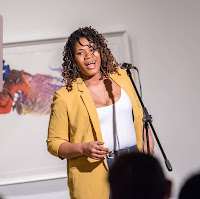 A decade-old Hudson County literary tradition, the Grand Open Mic is Jersey City Slam’s signature “open mic” show, where new and established poets, spoken-word artists, and other writer/performers gain new audiences by reading their work to the public. As usual with Jersey City Slam, the evening also showcases a Featured Poet – ChyKonic Speaks, a New Jersey-based Slam Poet who has competed at the National Poetry Slam and is a curator of the renowned DAMN Slam in West Orange.

Grand Open Mic Poetry can be of any style; newcomers welcomed. It is recommended that readers arrive early because the open mic list is expected to fill-up early.

The founders and poets of Jersey City Slam have not only organized numerous poetry projects throughout the region, but have represented Jersey City in national poetry competitions and offer spoken-word workshops for youths and adults. The Grand Open Mic is the first of a series of planned Jersey City Slam events hosted by JCTC.

“Poets have their fingers on the pulse of the community and the universe,” said Olga Levina, Artistic Director, JCTC. “Live poetry readings are a dynamic and immediate art form. Poets regularly explore issues that are global in scope but relevant to both the individual and the community, which is at the heart of JCTC’s mission. Jersey City Slam has been serving the community for a very long time and we look forward to collaborating with them now and for future projects.”

Grand Open Mic will be hosted by Jersey City Slam veterans and performance poets, Mark Skrzypczak and Ann Marie Manso. “We are excited to be working with JCTC,” said Skrzypczak, Event Coordinator, Jersey City Slam. “Slam has grown so much over the last few years and JCTC wants to help us take what we do to the next level by increasing our production quality and enhancing the experience for everyone. Grand Open Mic will be a first taste of things to come.”