WHEN: through Monday, November 4; a reception for the exhibit will be from 5:30 to 7 p.m. on Thursday, October 17.
WHERE: Livingston Municipal Building Gallery, 357 South Livingston Ave., Livingston

The exhibit is sponsored by the Arts Council of Livingston. 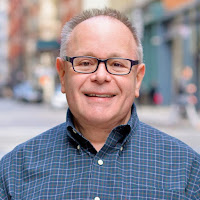 Born in Boston and raised in Sharon, Mass., Marshall is an award-winning contemporary painter. He has received numerous awards for his work, including the Mary Koether Merit Award from the West Essex Art Association. His work has been featured in many juried exhibitions, both group and solo, and is held in many private collections. One of his paintings was recently selected by the renowned curator and art consultant Paige Powell (once a member of Andy Warhol’s Factory) for inclusion in the permanent art collection of the new MC Hotel in Montclair.

“New York City Cthulhu,” the central painting of the exhibit, is a fanciful portrayal of New York City with modern and Steampunk elements. Featured in the painting is Cthulhu, a monster created by the horror writer H. P. Lovecraft, of whom Marshall is a fan. Another painting in this series, “Victoria Cthulhu,” shows levels of London in Victorian times, from royalty down to mine workers, with Cthulhu lurking underneath. Also included in Marshall’s exhibit are a number of abstract works in acrylic, mixed media, and oil and cold wax.