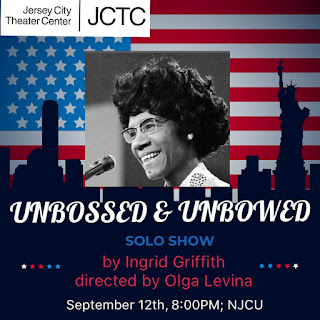 WHEN: Thursday, September 12, at 8PM
WHERE: West Side Theatre, 285 West Side Avenue, Jersey City
TICKETS: $25 General Admission and $15 Students/Seniors (with ID, at door only).
To purchase tickets, visit: https://www.njcu.edu/community/center-arts/theatre-dance
Please select JCTC-September 12

The life and times of one of the most pivotal and groundbreaking politicians of the 20th Century gets the full production treatment when Jersey City Theater Center (JCTC) brings Unbossed & Unbowed to New Jersey City University’s West Side Theatre, 285 West Side Ave Jersey City, New Jersey, opening NJCU’s Center for the Arts First Annual Festival of Independent Theatre Companies.

Unbossed & Unbowed is a one-woman play about Shirley Chisholm, the first black Congresswoman and the first black woman to run for President. The play was researched, written by and stars Ingrid Griffith (right), playwright, journalist, educator and actress. This premier production is directed by Olga Levina, Artistic Director, JCTC.

Chisholm, who dedicated her life to fighting for the poor, working class, people of color, and women, was born in Brooklyn to immigrant, Afro-Caribbean parents. She went on to become the first black woman elected to congress in the turbulent year of 1968 and went on to serve seven terms before retiring in 1983. In 1972, she became the first black candidate for a major party's nomination for President of the United States, and the first woman to run for the Democratic Party's Presidential nomination.

“Look at how many women are running today for the Democratic Presidential nomination,” said Levina. “JCTC is committed to creating theater that is relevant to what is going on in the world today. The role of women when it comes to political power, is one of the most important topics of our times, especially as we head into what will be one of the most decisive presidential elections in history. Shirley Chisholm’s work for justice and equality came at great personal sacrifice and we not only owe her a debt, but her life has lessons to teach us all.”

The West Side Theatre debut of Unbossed & Unbowed is also part of Stories of Greenville, JCTC’s multi-year arts program that uses arts as means to further neighborhood revitalization of the Greenville section of Jersey City, a community that is 83 percent African-American.

“Unbossed & Unbowed challenges us to know our history,” said Griffith. “I want to show what it took for Shirley Chisholm to become the first African-American Congresswoman in the U.S. and why her voice still resonates today.”

The play has had a long gestation process that included staged readings and partial performances in Manhattan, Brooklyn, and Jersey City. JCTC presented an Unbossed & Unbowed staged reading of Griffith's work-in-progress last October and a reading of the entire play as part of JCTC's New Play Festival in May.

“They pushed her aside, called her insane, yet she found the strength to get up again and again and push forward with dignity, honor and a genuine smile,” said Levina. “I am honored to direct the show about the extraordinary Shirley Chisholm who had the guts to speak up and demand change.”

The production at NJCU’s West Side Theatre will include staging, projections and audio-samples from the news reports era that saw the rise of this remarkable political leader. Through her meticulous research, Griffith has mirrored Chisholm’s authentic look – from 1960s era dresses to her actual glasses. Not only will this be the premier of the complete production, but is a crucial step in developing Unbossed & Unbowed into a touring show.

Unbossed & Unbowed was made possible by generous support from the Hudson County Office of Cultural & Heritage Affairs/Tourism Development, Thomas A. DeGise, Hudson County Executive and the Hudson County Board of Chosen Freeholders and the New Jersey State Council on the Arts.

Unbossed & Unbowed was also made possible through the generosity of Ben LoPiccolo Development Group, JCTC’s Board of Directors, private donors and local Jersey City businesses.