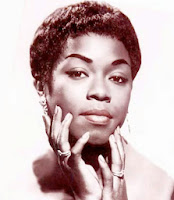 Time Is Running Out to Enter The 8th Annual

Vocalists are invited to submit applications at sarahvaughancompetition.com

For the eighth consecutive year, singers from around the world will gather online to compete in the Sarah Vaughan International Jazz Vocal Competition (aka the "SASSY" Awards)—a 21st century version of the amateur night at the Apollo Theater that helped launch the career of a gifted teenager from Newark, Sarah "Sassy" Vaughan, more than 75 years ago.

The competition at the New Jersey Performing Arts Center (NJPAC) presents the contest as part of the TD James Moody Jazz Festival (November 9-24) supported by TD Bank, America's Most Convenient Bank® – an annual celebration that fills both the NJPAC campus and venues throughout Newark with every kind of jazz. This year's finals will take place on Sunday, November 24 at 3PM in NJPAC's Victoria Theater, where the five finalists will compete for the top prize. “This esteemed event provides a platform for today’s outstanding jazz singers and gives audiences an early glimpse at tomorrow’s jazz stars,” writes Jazziz Magazine.

"Sarah Vaughan's artistry is timeless and irreplaceable. The great joy of this jazz vocal competition is discovering the extraordinary voices who will carry her legacy forward," said John Schreiber, NJPAC's President and CEO.

The SASSY Awards are a truly international competition and one of the only global vocal competitions of its kind. In the past few years, finalists have included Oleg Akkuratov (Russia), Deelee Dubé (England), and Sinne Eeg (Denmark). "We're thrilled that every season hundreds of singers from around the world, each in their unique way, advance the future of the music by entering this competition," Schreiber added. "We couldn't be happier that Sarah Vaughan continues to inspire musicians and music lovers via the SASSY Awards."

The competition has become a platform for a single outstanding jazz singer to gain widespread recognition in the music industry. Past winners include Cyrille Aimée, Jazzmeia Horn (winner of the 2015 Thelonious Monk Competition), Ashleigh Smith, Arianna Neikrug, Deelee Dubé, Quiana Lynell, and last year's winner, Laurin Talese, who performed at the 2019 Newport Jazz Festival as part of her triumphant win in last year's competition.

Vocalists (all genders welcome) ages 16 or older who are not currently signed to a major record label can enter by submitting at least three recordings at saarahvaughancompetition.com.

The Five finalists, who will be announced on Oct. 15, will perform at NJPAC before a panel of judges that includes multi-Grammy-winning bassist Christian McBride, Grammy- and Tony Award-winning jazz giant Dee Dee Bridgewater, vocalist Jane Monheit, WBGO weekend host Monifa Brown, and award-winning producer Matt Pierson. The competition is hosted by WBGO's morning show host, Gary Walker. Think you have what it takes? The judges are looking for vocal quality, musicality, technique, performance, individuality, artistic interpretation – and the ability to swing. The grand prize winner of the coveted SASSY Award will receive a $5,000 cash prize plus a performance slot at the 2020 Newport Jazz Festival.

The incomparable singer Sarah Vaughan was born in Newark in 1924 and was known as "Sassy" throughout her life for her vibrant personality. After winning the top prize of $10 at the Apollo Theater's amateur night at age 18 in 1942, she went on to record with the greatest names in jazz, including Count Basie, Duke Ellington, Billy Eckstine and countless others.