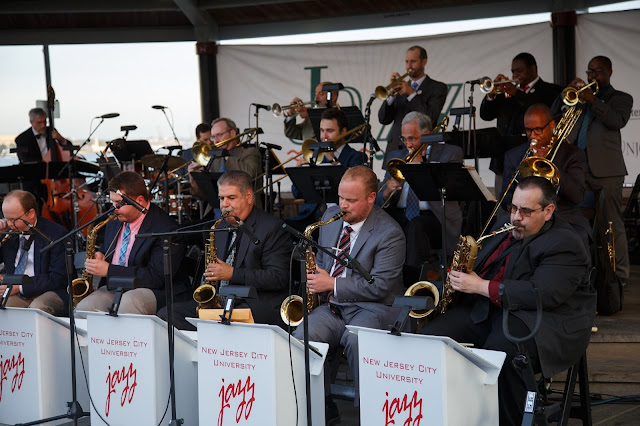 The New Jersey City University Center for the Arts presents

7th Annual NJCU Alumni Jazz Big Band Concert
WHEN:  Friday, September 6, at 6 p.m.
WHERE: J. Owen Grundy Pier, Exchange Place, in Jersey City
ADMISSION: free
Food trucks will be on site and seating is on a first-come, first served basis. If it rains, the concert will be held in the Harborside Atrium, Harborside 2 and 3 at 34 Exchange Place. The J. Owen Grundy Pier is located near public transportation and there are numerous parking lots in the area.

The concert pays tribute to the 100th birthdays of Nat King Cole and Art Blakey. Cole, who died at the age of 45, began his music career as a jazz pianist but went on to become one of the most popular jazz and pop singers of all time. Drummer Art Blakey enjoyed more than 60 years as a jazz musician, leading the iconic Jazz Messengers and being inducted into the Grammy Hall of Fame, the Modern Drummer Hall of Fame, and the DownBeat Hall of Fame.

The Alumni Big Band concert began in 2013 at the request of NJCU President Sue Henderson, a jazz enthusiast who was being inaugurated as the first woman president of the University, which was founded in 1927 as a teacher-training college. President Henderson asked Professor Richard Lowenthal of the NJCU Music Department to produce a jazz concert as part of the inauguration festivities and Lowenthal put out a call to alumni of the program who were active in the music business.

The first concert included many of the top big band players in the country with Lowenthal’s good friend and jazz trumpet player, conductor and composer Jon Faddis making a special guest appearance. The program was so well-received and attended that Henderson decided to make it an annual event with Lowenthal co-producing the concert with Don Jay Smith.

This year’s special guests include one of the most famous names in jazz, trumpeter Wynton Marsalis (right), who joined Art Blakey and the Jazz Messengers in 1980. An internationally acclaimed musician, composer, bandleader and educator, Wynton has won nine Grammy Awards, a Pulitzer Prize, the National Medal of Arts, the National Humanities Medal, plus numerous other awards and accolades. He expressed a delight to be able to pay homage to Art Blakey.

The salute to Nat King Cole features the Harlem-based vocalist Allan Harris (below, left), who the Wall Street Journal called “the most exciting young male singer on the scene.” Since launching his career some two decades 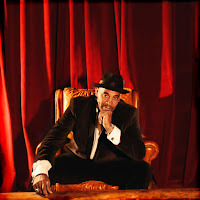 ago, Alan has won numerous awards, including the DownBeat Critics Award, two Hot House Jazz Magazine Awards, the Backstage Bistro Award and several others. Critics have compared him to Tony Bennett, Frank Sinatra, and, of course, Nat King Cole. Allan will be joined for duets featuring a New Jersey favorite, Antoinette Montague, who will reprise the Grammy Award-winning performance of Natalie Cole singing “Unforgettable.”

“Every year, we invite special guest artists to join our all-star alumni big band,” said Lowenthal, who retired from NJCU in 2017, “and we have been fortunate to have some greats including Jon Faddis, Randy Brecker, John Pizzarelli, Bucky Pizzarelli, Cyrille Aimee, Paquito D’Rivera and Lou Marini.”

The NJCU Alumni Jazz Big Band brings together an impressive group of musicians and shares their talents with the Jersey City community. NJCU jazz alumni have credits in Broadway, television, recording industry, and symphony orchestras, and have worked with some of the most legendary artists of all time, including Gerry Mulligan, Ray Charles, Buddy Rich, Maynard Ferguson, Lionel Hampton, Johnny Mathis, Nancy Wilson, Cher, Mel Tormé and Tony Bennett.

This is the seventh year the NJCU Alumni Jazz Big Band will present a waterfront concert on the J. Owen Grundy Pier. Previous concerts have been A Tribute to WBGO’s 40th Anniversary with guest soloist Paquito d’Rivera, A 100th Birthday Salute to Ella Fitzgerald, Dizzy Gillespie, Buddy Rich, and Thelonious Monk, with guest artists Jon Faddis and Cyrille Aimée; A Tribute to Lew Soloff of Blood Sweat & Tears with Randy Brecker; A Tribute to Clark Terry with special guest Wynton Marsalis; A Salute to the Other Jersey Boys with John Pizzarelli, Bucky Pizzarelli and Ed Laub; and A Celebration of the Inauguration of President Sue Henderson with trumpeter Jon Faddis.

These annual concerts are conducted by Professor Emeritus Richard Lowenthal, who retired in June 2017 after 50 years at the University. Lowenthal founded the Jazz Program at NJCU, then Jersey City State College, in 1969. Under Lowenthal’s leadership and continuing with professors Ed Joffe, Walt Weiskopf and Gabriel Alegria, NJCU boasts a strong jazz program on both the graduate and undergraduate levels.