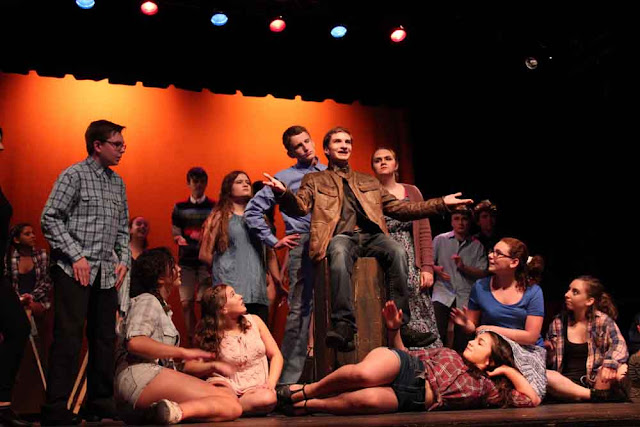 Dedicated to the enrichment of young lives through experience in the theatre arts, the Centenary Stage Company’s Young Performers Workshop returns with the annual

WHEN: August 9 through August 18
WHERE: Little Theatre, on the campus of Centenary University at 400 Jefferson Street in Hackettstown. Wait Until Dark taking place at the Edith Kutz Theatre in the Lackland Performing Arts Center on the campus of Centenary University at 715 Grand Ave. Hackettstown.
TICKETS: $12.50 for adults, $10.00 for children under 12, and $5.00 for YPW alumni. Admission for the Mini-Musical/One Act Playhouse is free. Tickets are available online at centenarystageco.org or by calling the box office at (908) 979 – 0900.

The Young Performers Workshop is also seeking new and returning applicants for the 2019 Fall Session. Interviews will be held by appointment on Saturday, August 17 and Sunday, August 18. To schedule an interview, call the box office directly.

A multiple Tony Award-winning theatrical tour-de-force—from John Wilkes Booth to Lee Harvey Oswald, Stephen Sondheim and John Weidman—bends the rules of time and space, taking us on a nightmarish roller coaster ride in which assassins and would-be assassins from different historical periods meet, interact and inspire each other to harrowing acts in the name of the American Dream.

In Polkadots: The Cool Kids Musical, 8-year-old Lily Polkadot moves to the "Squares Only" small town of Rockaway. As the first polkadot in an all Square school, Lily faces an almost impossible task of gaining acceptance. Inspired by the events of The Little Rock 9, Polkadots serves as a colorful history lesson for children, reminding them that our individual differences make us awesome. Created by Melvin Tunstall III, Greg Borowsk, and Douglas Lyons.

A Broadway hit written by Frederick Knott, This masterfully constructed thriller moves from one moment of suspense to another as it builds toward an electrifying, breath-stopping final scene. Sinister con man, Roat, and two ex-convicts are about to meet their match in Susy Hendrix. When the men attempt to recover a mysterious doll, a deadly game of cat and mouse ensues.

Series of Mini-musicals and One-act Plays

The Young Performer’s Workshop is now seeking new and returning applicants! Registration is open to students 8 – 18 and no prior experience is required. All new applicants are required to complete an interview prior to acceptance into the program.  Interviews for the 2019 Fall Session will be on Saturday, August 17, and Sunday, August 18. Cost of registration is $425 for the first student, $395 for the second and $300 for the third.

YPW is under the direction of Broadway, film and television veteran Michael Blevins. Students study technique in acting, voice, and dance in one of only a handful of programs in the nation that offer both formal training alongside practical application. The Fall Session begins on September 7th, culminating with the Winter Festival of Shows in December 14 – 22. There is a minimum of two productions planned for the session, and students are guaranteed a part in at least one. YPW participants will also have the opportunity to participate in Centenary Stage Company’s professional mainstage Family Holiday Musical, Beauty and the Beast. The workshop meets on Saturdays between the hours of 10 AM and 6 PM.

The 2019-2020 season of performing arts events at the Centenary Stage Company is made possible through the generous support of the Geraldine R. Dodge Foundation, the NJ State Council on the Arts, the Shubert Foundation, the Blanche and Irving Laurie Foundation, the Sandra Kupperman Foundation, Zonta Morristown Chapter and CSC corporate sponsors, including Season Sponsor Heath Village Retirement Community, The House of the Good Shepherd, Silver Sponsors Hackettstown Medical Center with Atlantic Health System, Home Instead Senior Care (Washington), and Fulton Bank of New Jersey, and Centenary Stage Company members and supporters.