WHEN: August 1, 2, 3, 7, 8, 9, at  8pm
WHERE: outdoor amphitheater at Pleasant Valley Park, Valley Road (next to the Veterans Hospital at Lyons), Basking Ridge
ADMISSION: free, but donations are gratefully accepted.
Bring lawn chairs or blankets for seating and a flashlight for finding your way after dark!
For information, call 908-204-3003.

The musical opened on Broadway at the Ziegfeld Theater on March 13, 1947, running for 541 performances and winning a Tony Award for Agnes DeMille for Best Choreography. The 1954 movie version starred Gene Kelly, Cyd Charisse, and Van Johnson.  Theatergoers will recognize the songs “Waitin' For My Dearie,” “Almost Like Being in Love” and “I’ll Go Home with Bonnie Jean.”

Brigadoon is directed by Jaye Barre of Basking Ridge, assisted by Marilyn Gamba and McKenna Moore, with musical direction by Joe Lesky of Somerset and choreography by Jill Cookingham of Take Flight Dance. 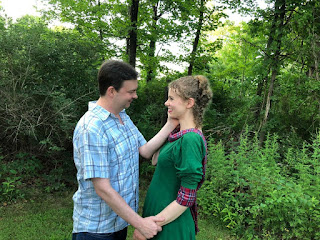 “The partnership of Trilogy Repertory and Bernards Township has produced over three decades of family entertainment and achieved several awards for both groups for excellence in theater programming.  Most prominent are the awards from ACT (Achievement in Community Theater) and the prestigious “Excellence in Cultural Arts Programming.”  Lerner and Loewe’s “Brigadoon” is made possible, in part, by support from New Jersey State Council on the Arts, and is presented through special arrangement with Music Theater International (MTI