There’s a great deal of sturm und drang in Tammy Ryan’s drama, The Wake, now receiving its world premiere at Kean University in Union. In fact, one might say that there is a surfeit of “storm and stress” propelling the plot line and character development. The atmosphere becomes so clouded with conflict—psychological and natural—that it’s often difficult to see the forest for the trees. 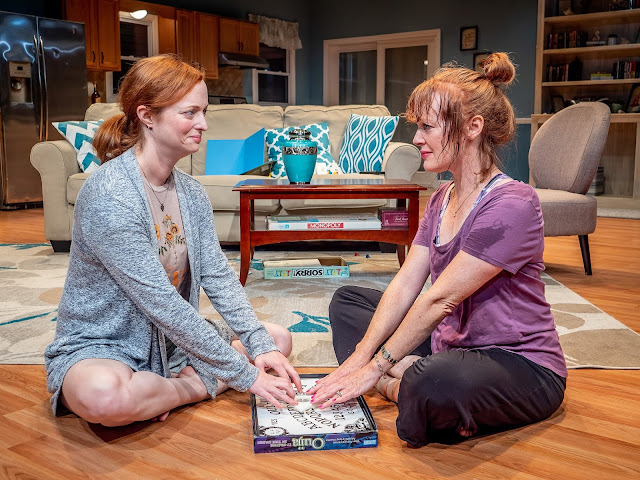 At its center, this winner of the 2019 Premiere Stages Play Festival, focuses on a fraught encounter between siblings Maggie and Rosemary (and their respective male partners) in a rented Florida beach house. The two have come together six months after her death from oral cancer to honor their sister Kathleen by scattering her ashes in the ocean she loved so much. Over the course of two days, the sisters engage in almost nonstop sniping to reveal familial secrets, many of which would better be left hidden. Add to this, a real weather event, a Category 4 hurricane, batters the bungalow, puts the occupants in physical danger and serves as a perfect metaphor for the sturm und drang within the four walls. (Above, Kelley Rae O’Donnell and Kathy McCafferty)

These two storms—one psychological, one actual—could be enough for a family drama, but Ryan adds three more points of contention involving economic, environmental and marital discord, none of which advances the plot or adds to character development. And therein lies the rub: Too many storms spoil the dramatic brew so that I found myself disliking the characters and not caring much about their past, present or future.

One of the hallmarks of a Tammy Ryan Play (Lost Boy Found at Whole Foods and Soldier’s Heart—both previously produced by Premiere Stages) is her natural dialogue and, for the most part, she doesn’t disappoint in The Wake. Director John Wooten has assembled a quartet of fine performers who deliver Ryan’s words in a convincing manner. Too, Wooten’s taut direction matches the rising storms inside and outside the cabin, to great effect. And, if you ever wondered what sound and lighting designers contribute to a production, well, Emily Auciello and Greg Solomon, respectively, give a master class in the craft as the light changes to yellowish-gray, the rain pelts the roof and the wind howls outside.

Kelley Rae O’Donnell’s Maggie and Kathy McCafferty’s Rosemary are a study in contrasts. Maggie “lives moment to moment and takes people at face value” and earnestly worries about the health of the environment. In contrast, drama queen Rosemary leads a more luxurious life, as emphasized by her revolving wardrobe, affection for fine wine and love of grand accommodations. She is a judgmental harridan, still griping over being “ganged up on” by Maggie and Kathleen as kids. She rarely speaks in a conversational tone; rather, she rants—about Florida, about her marriage, about her sister. Even her story about being dragged out to sea while on a walk on the beach during a lull in the storm sounds preposterous. She’s loud, and tiresome. Both actresses play their parts well, especially given the rather thankless roles Ryan has developed for them. 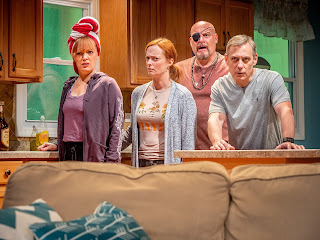 The male characters are more of a cipher. Maggie’s boyfriend Doyle (played by James Gushue) is a down-and-out biker dude who sells junk on eBay for a living. Thanks to Gushue’s body language and Karen Lee Hart’s costumes, he’s a bit intimidating, certainly a fish out of water even in this family, with his earring, missing teeth, tank top, bracelets and tattoos. He’s there not only to support Maggie but to rant against the 1% at the top of the economic ladder and for conserving nature by better recycling. These sound more like polemics than conversation and add to the sturm und drang onstage. On the flip side, there’s Rosemary’s husband Ed (played with buttoned-up aplomb by Wayne Maugans), CFO of a fracking company in Pennsylvania, a man with secrets about money he’s attempting to hide from his wife (who thinks he’s cheating)—this plot thread leads nowhere and is superfluous. Doyle’s berating him about the effect of fracking on the environment made my head ache. (Above, McCafferty, O’Donnell, James Gusue and Wayne Maugans)

Bethanie Wampol Watson’s scenic design is pure Florida modern; Helen Tewksbury has assembled nifty props appropriate to a rental cottage: board games (Monopoly, Sorry, a Ouija board), a funerary urn, and even a pelican who attacks the windows (and Doyle).

According to Aristotle, an integral characteristic of drama is conflict. Unfortunately, The Wake suffers from too much conflict, hopscotching from one to another, so that our heads spin and we lose interest. And with four characters holed up with nowhere to go and nothing to do, the proceedings become very talky, leading to a verbose, long second act.

Ryan’s play would have been more successful had she focused on the sisters’ complicated relationship so we would learn why Maggie and Kathleen shut Rosemary out, why Rosemary feels guilty over her sister’s death. With personal issues trumping the ideological ones, The Wake would have been more engrossing and satisfying.

The Wake will be performed at the Bauer Boucher Theatre Center on the campus of Kean University, 1000 Morris Ave., Union, through July 28. For information and tickets, call the box office at 908.737.7463 or visit Premiere States online at www.premierestagesatkean.com.