JAZZ @ WPU IN WAYE: GET YOUR TICKETS NOW!

WP SUMMER JAZZ ROOM and Jazz on the Plaza

*Week pass is on sale through Thursday, July 11th.

Come early each day (rain or shine) and enjoy a free jazz session on the Shea Center Plaza.

There will be chairs available (or bring your own). In the event of inclement weather, Jazz on the Plaza concerts will be held inside the Shea Recital Hall 101.

Sip 'N Swirl and Empanada Guy food trucks will be on site.

The Summer Jazz Workshop Faculty and Staff Play the

The traditional Monday night concert is bigger and better! Veteran workshop faculty members return to the Shea stage with Tim Newman on bass trombone, James Weidman on piano, and Steve LaSpina on bass. They will be joined by talented young staff who are integral to the workshop as teachers, mentors, and counselors: Abel Mireles on saxophones, Cecil Alexander on guitar, and Jon DiFiore on drums-plus, a few surprise guest artists. The group will honor the iconic jazz saxophonist, composer, and educator, Jimmy Heath, who was the artist-in-residence at the workshop from 2011-2018. 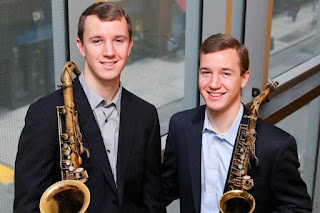 The music of the extraordinary virtuoso woodwind players Peter and Will Anderson "consistently brings a fresh perspective to classic jazz" [Washington Post]. They have performed with the Jazz at Lincoln Center Orchestra, the Vanguard Jazz Orchestra, Wycliffe Gordon, Cécile McLorin Salvant, Paquito D'Rivera, Wynton Marsalis, Frank Vignola, and can be heard on the 2014 Grammy-winning soundtrack of HBO's Boardwalk Empire with Vince Giordano's Nighthawks. They bring a quintet that is bound to delight Summer Jazz Room fans!

Jazz on the Plaza:
The Cecil Alexander Group, 6:15PM

Outstanding vocalist Vanessa Rubin returns to the Shea stage for a third performance. Rubin trained under grandmasters like Frank Foster and Barry Harris, and went on to record with a wide array of artists such as Monty Alexander, Steve Turre, Herbie Hancock, James Williams, Etta Jones, and Toots Thielemans. She has toured with Herbie Hancock, the Woody Herman Orchestra and the Jazz Crusaders. For this performance, Rubin will be accompanied by Big Beat, an exciting, WP alumni-led jazz orchestra, which just released their first recording.

Jazz on the Plaza:
The Joe Spinelli Trio, 6:15PM

Nilson Matta is well known as the worldclass bassist of Trio da Paz, but his solo career as a composer and bandleader is equally noteworthy. Born in Sao Paulo, Brazil, Matta was recognized at a young age and played with such luminaries as Joao Gilberto, Hermeto Pascoal, and Luis Bonfa, among others. Since his arrival in New York in 1985, he has performed and recorded with Joe Henderson, Paquito D'Rivera, Slide Hampton, Herbie Mann, and many others. With longtime friends Romero Lubambo and Duduka da Fonseca, he is a founding member of Trio Da Paz, which has earned accolades as one of the foremost Brazilian jazz groups in the world. "Brazilian Voyage" is an apt title for tonight's group, as Matta's expert knowledge of Brazilian jazz unfolds.

Jazz on the Plaza:
The Abel Mireles Group, 6:15PM

For five decades, Rufus Reid has been a consistent and formidable influence in the jazz world as a bassist and educator. His work with Dexter Gordon, The Thad Jones-Mel Lewis Orchestra and Quartet, Kenny Barron, Stan Getz, and Lee Konitz, to name a few, has cemented his stature as one of the great living deans of the jazz bass. For 20 years Reid was director of William Paterson University's Jazz Studies Program and was instrumental in building the program's international reputation as one of the leading jazz schools in the world. He has recorded more than a dozen albums as a leader. As a composer, he has written for strings, jazz ensembles of varying sizes, solo bass, symphony orchestras, and has received two Grammy Nominations for his compositions.