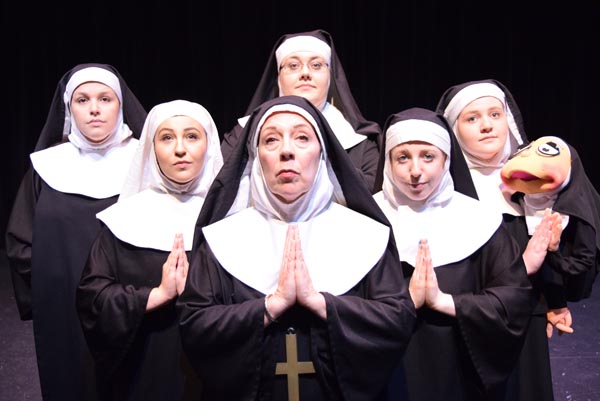 Through next weekend, The Centenary Stage Company is presenting a perfect summer confection: the very funny, family friendly musical comedy Nunsense with book, music and lyrics by Dan Goggin. The play which first opened off-Broadway in 1985 and ran for 3,672 performances, second only to The Fantastics, has been so successful that it has spawned six sequels.

The wacky plot concerns a convent in Hoboken that is presenting an all-Nun performing fund raiser at a local theatre complete with scenery for an amateur production of Grease. The Little Sisters of Hoboken are in need of cash in a hurry due to a "minor" accident in the convent kitchen by their cook, Sister Julia, Child of God. She has accidentally poisoned 52 of the sisters, and they are in dire need of funds to complete the burials. Their funds ran out after burying 48...the remaining four are resting in the kitchen freezer ... a big "no-no" with the Hoboken Health Department. This unique predicament is recognized in song ..."We've Got to Clean Out the Freezer"!

Each of the five nuns is nicely cast and demonstrate considerable talent, most impressive is their obvious enjoyment—they seem to be having as much fun as the audience. Each gets an opportunity to perform a solo, however, the star-turn belongs to Cynthia Livingstone. She is absolutely marvelous as the Mother Superior. She sings with charm, dances with ‘grace’ and displays fine comic timing.  Ali Ross Harton is spot-on as the second in command Sister Hubert who plans some day when she becomes the M.S. to elevate the Little Sisters of Hoboken to The Big Sisters of Newark! She and Cynthia Livingstone have a fun time with the duet "Just A Coupla Sisters." Rach Phelan ("So You Want to Be a Nun"), Brianna Morris ("Benedicite") and Megan Schmiedhauser, a major comedy talent, ("I Just Want to Be a Star") each have fine amusing solo singing turns. In total there are 19 musical numbers all clever, bright, and nice on the ear. They cover every type of song – country, gospel, religious. The jokes are offered at the pace of Superman’s speeding bullet. If a joke doesn’t land fully, don’t worry another one is following in the next sentence.  The audience even gets in on the act as the sisters interact throughout the show.

Don't be put off if you are not Catholic, this is a very ecumenical laugh-fest. If you are Catholic you are sure to enjoy the loving pokes at the church provided by the Little Sisters of Hoboken. Many of the jokes, puns and turns of phrase may be of the less sophisticated variety, but the ladies are clearly having fun performing their fund raiser and it is contagious. In fact, forgive me, habit-forming! You have until July 21, 2019 to participate in the fun.

Note: Nunsense is recommended for audiences age 12 and over.

The performance dates: July 11 through July 21 in the Lackland Performing Arts Center on the campus of Centenary University. Individual performances run Thursdays at 7:30 pm, Fridays at 8:00 pm, Saturdays at 8:00 pm and Sundays at 2:00 pm. Tickets range from $18.00 to $30.00 with discounts available for students and children under 12. Tickets are available on line at centenarystageco.org or by phone at (908) 979 – 0900.