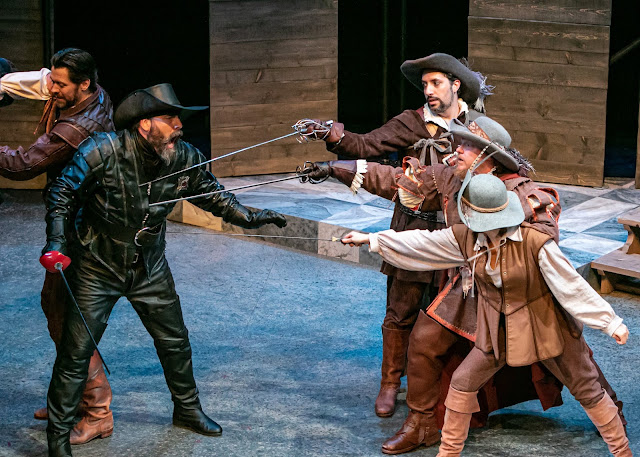 To the adjectives “rowdy,” “raucous” and “rollicking” that describe the Shakespeare Theatre of New Jersey’s production of Ken Ludwig’s The Three Musketeers, a dramatic adaptation of Alexander Dumas’ old chestnut, one must add “swashbuckling” in letters 12 feet high. Despite a sluggish second act, a huge cast maneuvering around the stage and characters who often resemble caricatures instead of real people, this beautifully staged, sumptuously costumed and well-performed production opens the troupe’s 57th anniversary season with a bang. (Top L-r: John Keabler, Jeffrey M. Bender, Alexander Sovronsky, Paul Molnar and Cooper Jennings) 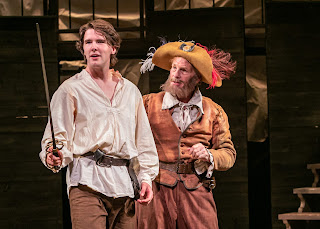 Best known for his farces (Noises Off, Lend Me a Tenor), Ludwig eschews the genre’s slamming doors for sword fights (nearly a score of ‘em, staged by fight director Christian Kelly-Sordelet), making the action swirl and twirl around the stage, almost overpowering the coming-of-age tale of young D’Artagnan (left, with his father), newly arrived in Paris from provincial Gascony, to join King Louis XIII’s Musketeers, the trusted defenders of the realm and its monarch. The result is an near-constant battle between the youth and the three musketeers he befriends—Athos, Porthos and Aramis—and, later, the two menacing swordsmen in the service of the conniving, evil Cardinal Richelieu, the would-be ruler. To “modernize” the original 17-century story, Ludwig invents D’Artagnan’s feisty little sister Sabine, who, disguised as his male servant Planchette, asserts her right to an exciting life instead of going to a convent school to improve her marital prospects. While it’s an interesting touch, Ludwig doesn’t do much with the character; indeed, in the second act, she disappears for a stretch, so that when she suddenly appears, we’re a bit surprised.

Add to all this complexity a lost letter of introduction; a diamond that must be retrieved; D’Artagnan’s instant infatuation with one of the Queen’s ladies-in-waiting; and a scheming noblewoman, and you’ll be excused if you have trouble keeping track of events.

That said about Ludwig’s script, STNJ’s production embodies everything we have come to expect from this stellar troupe. First off, the acting superbly conveys the myriad characters Dumas created. Youthfully handsome Cooper Jennings is perfect as the unsophisticated D’Artagnan, all endearingly agog at what Paris, the palace and the musketeers have to offer. As the titular three musketeers, Paul Molnar’s portly Porthos is a true fashionista; John Keabler’s Athos is a tortured soul (we find out why in Act II); and Alexander Sovronsky’s Aramis quotes Scripture like the priest he’ll become in the future. It’s important to note that Sovronsky is a 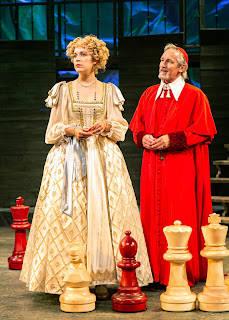 multitalented performer: He designed the sound and composed original music for the production!

As Cardinal Richilieu, Bruce Cromer is the embodiment of evil, scheming to get the Queen (a regal Fiona Robberson, with Cromer at right) in trouble, operate behind the back of doofus King Louis (Michael Stewart Allen) and put the loyal Musketeers out of commission. He’s aided and abetted by one-eyed Rochefort and fierce Ravanche (portrayed with palpable nastiness by Jeffrey M. Bender and Patrick Toon, respectively) who work mightily to please their master. And Clark Scott Carmichael elicits much merriment swishing around the stage as the Queen’s lover, the English Duke of Buckingham. 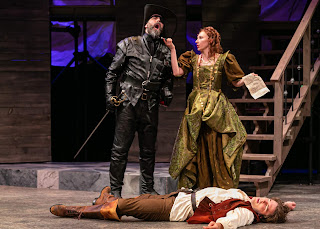 The trio of young women—Milady, Constance and Sabine—are a study in contrasts. Anastasia Le Gendre (left, with Bender and Jennings) suitably chews up the scenery as the devious, treacherous Milady, a former felon who’ll stop at nothing to get what she wants, even if it means disobeying her patron the Cardinal. As the young noblewoman Constance, Billie Wyatt (below, right, with Jennings) has little to do other than look delicately delicious, which makes her demise at the hands of Milady especially sad. Courtney McGowan’s casting as Sabine has its own drama: When the original actor broke a bone in her foot during previews and had to withdraw, McGowan, aided by the entire cast, stepped in to create an adorable, wide-eyed, yet steely, young woman determined to escape her feminine fate. Her terrific performance (only one scene “on book”) got a standing O on opening night! 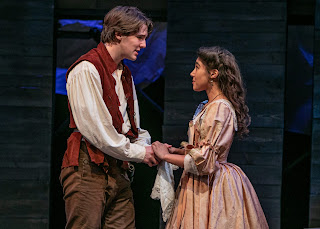 Director Rick Sordelet (an accomplished fight director veteran of many STNJ productions) keeps the action moving, although the many story strands that must be resolved in Act II slowed down the plot so found myself sneaking a peek at my watch. Brian Russman has assembled a veritable warehouse of period costumes in luscious fabrics, a rainbow palette of color and trim, with shoes to match! A list of 14 contributors assuaged my alarm at the expense it would have taken to dress the cast from scratch!

Brian Prather’s multipurpose two-level stage provides a quiet backdrop for all this color and spin. Matthew E. Adelson’s lighting is atmospheric yet unobtrusive. 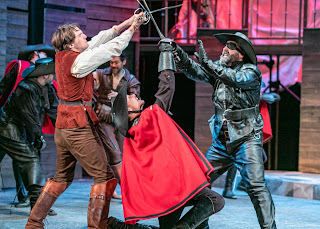 This action-packed, well-acted, kind-of-updated version of Dumas’ classic, Ken Ludwig’s The Three Musketeers (yes, that’s the play’s billing title), provides those audience members enamored of comic book heroes with a familiar conflict, good vs. evil, involving characters who wear capes and wield weapons to thwart those who would undermine and ultimately destroy civilization. That the good guys (and gals) leap off the original novel’s page with humor and panache will certainly appeal to theater fans aged 14 to 94.

Ken Ludwig’s The Three Musketeers will be performed at the F.M. Kirby Shakespeare Theatre, 36 Madison Ave., Madison (on the campus of Drew University) through July 7. For information and tickets, call the box office at 973.408.5600 or visit www.ShakespeareNJ.org online.