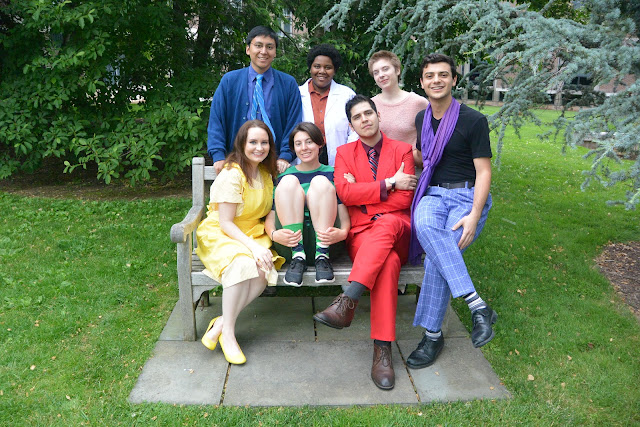 As the fiftieth anniversary of the Stonewall Uprising brings the state of LGBTQ+ rights in America to the forefront of the national conversation, Princeton Summer Theater will open its 2019 Season on June 20 with William Finn and James Lapine’s timeless and timely Falsettos.

A reworking of two earlier one-act musicals by Finn, Falsettos begins a decade after Stonewall, during the heyday of chaise-lounge therapy and “banana-carrot surprise.” The first act, set in 1979 and written in 1981, chronicles the shifts in family dynamics that arise after New Yorker Marvin (Michael Rosas), leaves his wife Trina (Bridget McNiff) for another man (Whizzer, played by Dylan Blau Edelstein). This breezy turmoil develops into something darker in the second act, written in 1991, which skips forward two years and finds the play’s characters unwittingly facing the beginnings of the 1980s AIDS crisis.

Because its two acts were written a decade apart, Falsettos uniquely captures the epidemic’s sudden and devastating spread while remaining true to its charming, flawed, and compassionately-drawn cast of characters. Uniting both acts is a high-energy, rhythmically complex score, described as “unusually intricate and interesting” by Musical Director Amber Lin.

But despite Falsettos’ deep roots in the late seventies and early eighties, many of its conflicts--from divorced parents duking it out over a child’s coming-of-age celebration to a family coming together during a serious illness--resonate even today. While working on the show, Krane drew heavily on his own experiences, remarking that “[a]s a queer, Jewish man living in New York, [directing Falsettos] has been one of the most special experiences of my life.” Framing the story as a coming-of-age tale about “found families,” Krane has centered his production around the notion of “play.” Outfitted in colorful costumes in a set that simultaneously recalls a yuppie high-rise and a child psychiatrist’s office, the musical’s characters fight, make up, and fall in love, using toys to physicalize their complex interpersonal conflicts.

Krane’s unique blend of buoyant play and thoughtful consideration of human experience is also an excellent encapsulation of Princeton Summer Theater itself. Founded by three Princeton undergraduates in 1968, the company has delighted audiences with top-quality productions by the next generation of promising young performers and designers. Named “New Jersey’s Favorite Small Theater” in 2018, it has been lauded as “summer stock with a Princeton pedigree.”

Falsettos will be followed by three other productions in a season which promises to explore love in all its forms, including:  Ira Levin’s Deathtrap, William Shakespeare’s A Midsummer Night’s Dream, and Suan-Lori Parks’ Topdog/Underdog. The company will also premiere an original children’s show by Princeton alumna Annika Bennett entitled Puck’s Midsummer Mischief.