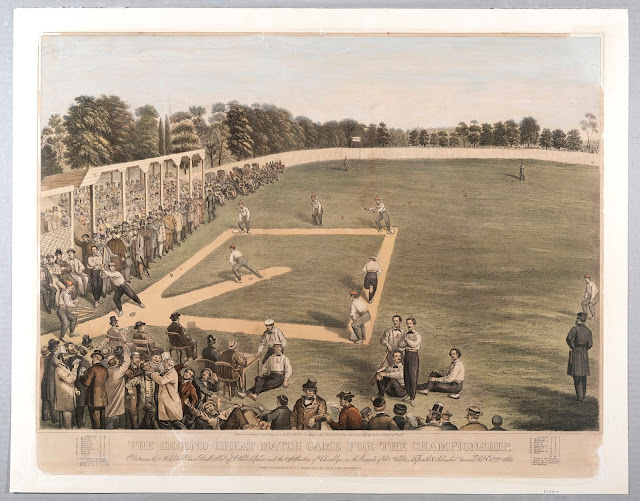 The new exhibition describes the nature of the first New Jersey baseball clubs, the differences between 19th century baseball and the modern game, it also covers the African-American experience and women’s participation.

The companion book, A Cradle of the National Pastime: New Jersey Baseball, was written by Zinn and provides a detailed look at the years 1855 to 1880.

Notable baseball firsts, including the founding of the first African-American club, the first interscholastic game, and some of the earliest documented women’s games all took place in New Jersey.  The state’s role in the early development of the organized game was of such importance that New Jersey can be justly described as a cradle of the National Pastime.

For more than 200 years Morven has played a role in the history of New Jersey and the nation. Originally part of a 5,500-acre tract purchased from William Penn in 1701 by the Stockton family, it is  the home of Richard Stockton, a Signer of the Declaration of Independence. As well as serving as a Stockton homestead for several generations into the 20th century, Morven was home to the families of Robert Wood “The General” Johnson Jr., and eventually five New Jersey governors, three generations of enslaved families, respective domestic workers and staff.

IMAGE: The American National Game of Baseball: Grand Match for the Championship at the Elysian Fields, Hoboken, N.J., 1866, Hand-colored lithograph by Currier & Ives, Currier & Ives / Museum of the City of New York. 58.300.34