Gilbert Gottfried to Perform in Teaneck for One Night Only Fundraiser! 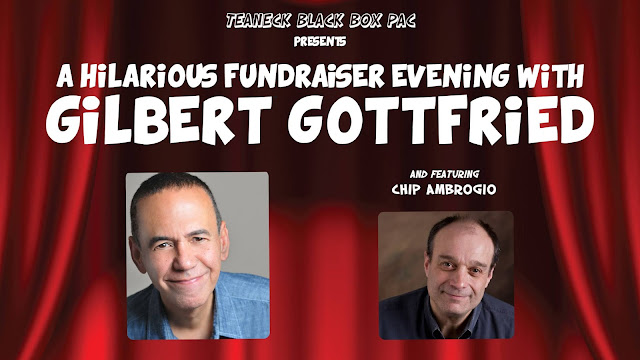 WHEN: Thursday, June 27th, at 8pm
WHERE: Black Box Performing Arts Center, 200 Walraven Drive, Teaneck, NJ
TICKETS: $50 plus a $5 service fee. Tickets can also be purchased at the venue, depending on availability. Due to limited seating, it is recommend patrons buy tickets ahead of time! The show is for mature audiences only and is BYOB.
Tickets are available at www.blackboxpac.com/gilbert

At the young age of 15, Gilbert Gottfried began doing stand-up at open mike nights in New York City, after a few short years, became known around town as "the comedian’s comedian." After spending several years mastering the art of stand-up comedy, producers of the legendary NBC late night comedy show Saturday Night Live became aware of Gottfried and, in 1980, hired him as a cast member. It wasn't until a few years later when his true notoriety would begin when MTV hired him for a series of improvised and hilarious promos for the newly formed channel. This led to several television appearances on The Cosby Show and Late Night with David Letterman. Gottfried's work in television soon led to roles in film. After his stellar performance as the wise cracking parrot, IAGO, in the Disney classic Aladdin, Gottfried became one of the most recognizable voiceover talents, lending his voice to several commercials, cartoons and movies, including the frustrated duck in the AFLAC Insurance commercials. As a famed comics comic, Gottfried puts aside political correctness for his live performance and fires an onslaught of jokes that know no boundaries.

Opening for Gottfried is Chip Ambrogio. Chip's comedy career includes performing on the road and all the major city clubs. Chip has been a contributing writer for The Friars Club Roasts and the Hulu Plus project Don't Know Jack. He is co-creator of Room for Improvement, a reality show pilot selected as a finalist at the New York Television Festival. Currently writing for some of today’s top headliners, he's a sought after joke doctor for established acts and top newcomers. As a comic, he has worked Atlantic City, Vegas and a variety of corporate and private events. Before becoming a standup comic, he was the editor and publisher of Commuter Monthly, a humor magazine for New Jersey commuters. He's had several of his short stories published- amongst them, Plastic Jesus and Deep Tux. He has also appeared in the independent films, Secure and Time of Need.

An evening of comedy with Gilbert Gottfried is presented by BBPAC and J. Irwin Productions, based in Bergen County.