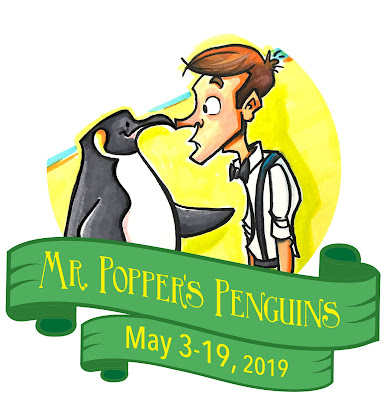 MR. POPPER’S PENGUINS
WHEN: May 3rd – 19th with performances Saturdays and Sundays at 4:00 PM
WHERE: Historic Palace Theatre, 7 Ledgewood Avenue in Netcong
TICKETS: $28 for adults, $22 for seniors and $18 for children.
To purchase tickets, please visit www.growingstage.com or call (973) 347-4946.  Group rates are available.

Based on the novel by Richard and Florence Atwater and featuring music and lyrics by George Howe and book by Robert Kauzlaric, this production is directed by Lori B. Lawrence, TGS’s Director of Educational Programming with Musical Direction by Stephen Fox and Choreography by Jillian Petrie.

In MR. POPPER’S PENGUINS, money is tight and times are tough in the town of Stillwater. With no houses to paint till next spring, Mr. Popper is stuck at home daydreaming of Arctic adventures, while Mrs. Popper must scrimp and save just to put beans on the table. But with the unexpected arrival of a spirited penguin named Captain Cook, a new horizon opens before them and before long the Poppers have a snowdrift in the living room and a dozen delightful penguins living in the house. With an ever-increasing bill for canned shrimp, what can the wonderfully imaginative Poppers do but train the penguins and take the show on the road! It’s a flipper-flapping musical tale that will make you believe in the power of ingenuity and determination.

MR. POPPER’S PENGUINS features the talents of six professional performers in the cast.  Returning to the Palace are: Joey Sanzaro (The Wizard of OZ) of New York, NY as Mr. Popper; Lyndsey Brown (Disney’s The Little Mermaid, The Wizard of OZ) of High Bridge, NJ, as Mrs. Popper; Donald Danford (Babes in Toyland) of Rockaway, NJ as Admiral Drake/Others; Niall Ng (Babes in Toyland) of Maplewood, NJ as Captain Cook the Penguin.  Making their Growing Stage debuts are Jessica Stanzek of South Brunswick, NJ, as Mrs. Callahan/Others and Sarah Emaline Melton of Union City, NJ, as Greta the Penguin.

Sensory Friendly Performance – On May 19th at 1PM, The Growing Stage will present a sensory friendly performance of MR. POPPER’S PENGUINS.  At this performance, see the full production in a safe, supportive environment.

The Growing Stage’s programs are made possible, in part, by funding from the New Jersey State Council on the Arts, and contributions from numerous corporations, foundations, and individuals.  The Growing Stage continues to nurture the development of the performing arts through education, and to create, produce, and perform works that engage the entire family.