The Waltuch Gallery at the Kaplen JCC on the Palisades Presents

WHEN: On Display May 1-30. Gallery hours are Monday – Thursday, 9 am - 10 pm; Friday and Sunday, 9 am – 4 pm (in winter); closed Saturday and Jewish holidays.
WHERE: The Kaplen JCC on the Palisades Waltuch Art Gallery, located at 411 E. Clinton Avenue in Tenafly, NJ
For more information on gallery exhibitions, contact Nina Bachrach at 201.408.1406 or nbachrach@jccotp.org. 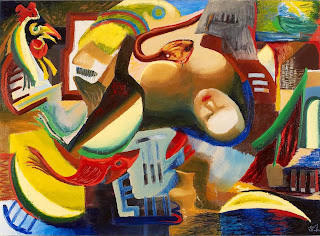 Elam was born in Brazil, where he attended the Escola Nacional de Belas Artes in Rio de Janeiro and began exhibiting in one-man shows in the early 1970s at popular galleries in both Sao Paulo and Rio de Janerio. In the 1980s, he won an international award in Brazil, was featured in a group exhibition at the Taipei Art Museum in China, and at the World Trade and Cultural Center in Amsterdam. In 1989 he moved to Jerusalem’s Old City, where he held numerous solo exhibitions at the Lucian Krief Gallery. He now lives in the US, where his more recent exhibitions include solo shows at the Patterson Museum, and the Etervana and Atrium Galleries in NJ, as well as the Riverdale Y in NY. His works are also prized in private international collections as well as permanent collections in museums worldwide, including the Museum of São Paulo, Brazil. 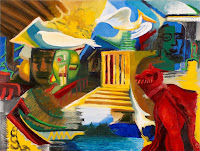 “I make use of any language that comes to me in the flow of my work, whether representational or abstract, and find I am influenced by realism as well as expressionist cubism and other schools of thought,” says Elam. “Art is a cultural puzzle, much like walking in globalized metros or cyberspace, a mix of that Babel noise that reverberates everywhere. My aim is to create dialogues that assemble contradictory messages in a harmonic plane. In some ways, I suppose I am creating my own version of William Blake’s visions – the mystic, the transcendental, and the common field connecting the creator and observer. My artwork only feels complete when it generates a new and unique experience for me and my viewers. As they say, art is life.” 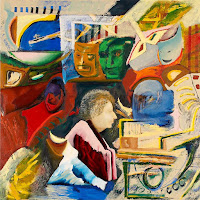 Looking to cope with the contemporary world and all its many forms of blindness and destruction, Elam’s work is a visionary attempt to restore our powers of seeing. He uses a richness of color that is clearly reminiscent of his Brazilian land, and his style reflects surrealist and symbolist influences that allow for unexpected, thought-provoking interpretations. Fascinated by diversity and contradiction, Elam’s paintings successfully portray the struggles of life in dreamlike works that seem to resolve conflict by achieving a unified, harmonic whole, while images that evoke ever-present instability, danger, and death hover around the borders. His aesthetics resonate with the notion of tikkun olam (repairing the world) and his hope as an artist is to conceive paintings that “restore” art as a means of framing and representing the world.

The Waltuch Art Gallery is a community space that exhibits thematically Jewish artwork, or art produced by Jewish artists. All gallery exhibits and receptions are free and open to the community, where JCC membership is not required.