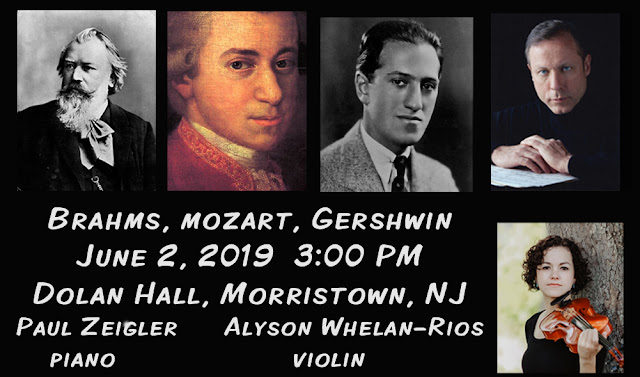 Brahms, Mozart, Gershwin
WHEN:  Sunday, June 2, 3 p.m.
WHERE:  Dolan Hall, The Annunciation Center, at The College of St. Elizabeth, 2 Convent Road in Morristown
TICKETS: $40, adults; $30, senior; and $5 students, under 22 with ID.
Tickets can be obtained by visiting the Orchestra’s web site www.baroqueorchestra.org or by calling the office, 973-366-8922; or at the door on the day of the performance

The concert features Variations on a Theme of Haydn by Brahms, Violin Concerto #3 by Mozart and Gershwin’s Piano Concerto in F. In addition there will be performances by two youth ensembles. The Lakeland Youth Symphony will perform Purcell’s Rondo, Bach’s Air from Orchestral Suite #3, movement 1 of Mozart’s Eine Kleine Nachtmusik, movement 1 of Dvorak’s American String Quartet, and an arrangement of Desmond’s Take Five. The young pianists of Keys 2 Success will perform piano ensemble arrangements of Sibelius’ Finlandia and the Theme from the movie Moana.

Brahms composed the Variations in the summer of 1873.He was inspired by a score arranged for wind ensemble of the Chorale St Antoni, attributed to Franz Joseph Haydn. Many scholars believe now that the arrangement was not actually by Haydn at all, but that publishers added his name in the hopes that Haydn's name would lead to great sales. However, no other composer or arranger has been found, so perhaps it was by Haydn after all.

"Whether the original chorale was composed by Haydn or not doesn't really matter," Maestro Butts commented.  "The strength of the work lies in the brilliant variations Brahms composed upon the chorale."

The Violin concerto was composed by Mozart between 1773 and 1776. At the time, he served as concertmaster for the orchestra of the Archbishop in Salzburg.   Most likely, he composed it for himself as soloist.  This 3rd concerto is one of Mozart's most popular early compositions.   It is filled with Mozart's energy and exuberant spirit.  The 2nd movement adagio is a bit unique in that it calls for two flutes to replace the two oboes in the other movements.   While a bit unique for Mozart, his was fairly common practice in the Baroque era when composers preferred the sound of two oboes for the more lively movements and the sound of two flutes for the more intimate and expressive movements.

The featured violin soloist will be guest artist Alyson Whelan-Rios. Ms.Whelan-Rios performs internationally as a soloist, chamber and orchestral musician throughout the US, Canada, Europe, South Korea and Japan. She holds a Master of Arts degree in performance from NYU and also owns the instruction studio, Viva Violin, while serving as Orchestra Director at The Pingry School.

Gershwin's exciting concerto was composed in 1925 on commission from Walter Damrosch and the New York Symphony Orchestra, later to merge with the Philharmonic Society to become the New York Philharmonic.  Gershwin was asked to compose the concerto following the enormous success of Rhapsody in Blue the previous year.

Though the concerto resembles the Rhapsody in its use of jazzy rhythms and blues notes, it was a big step for Gershwin as a composer.   In form and structure, it is inspired by the great concertos of Beethoven and Brahms.  Thematic development and relationships are more intimately bound together.  The entire work is much more a work for piano and orchestra rather than piano with orchestra.

“I really look forward to performing this exciting work," Maestro Butts commented.  "Of course, I love performing Rhapsody in Blue, but the concerto represents a musical stretch in which we can hear Gershwin taking his ideas to new levels of creativity."

The featured piano soloist for the Gershwin concerto is Paul Zeigler, a frequent and favorite performer with the BONJ.

Paul Zeigler's multifaceted career as a pianist, composer, teacher, lecturer and adjudicator has taken him on performances throughout the United States, Canada, and Europe. But no matter where he has performed, the critics have been unanimous: "absolutely thrilling, emotionally exciting, mind-expanding... a virtuoso performer."

When not performing and composing, Mr. Zeigler teaches music privately at his studio in Madison, New Jersey. He takes great pride in the fact that many of his students have gone on to win awards and acclaim in their own right.

"Preparing the George Gershwin Concerto in F for performance has been, for me, an exciting exploration into his multilayered masterpiece, a work that may very well be Gershwin’s greatest," said Mr. Zeigler.

“While the entire concerto is a challenging virtuosic endeavor for the piano soloist," Mr. Zeigler added, "it is also a collaborative work of the highest order, featuring many solos from within the orchestra, often in conversation with the piano. But the true brilliance of the piece is that it never feels contrived or academic. The sincerity of its ideas always feels fresh, new, and exciting. It is a profoundly personal work but one that also captures the spirit of its own time, the Roaring Twenties.  In 1925, at just 27 years of age (and one year after his historic achievement with Rhapsody in Blue), George Gershwin was able to merge these elements into an epic masterpiece that remains satisfying and relevant for all times."

The concert will have two special guest youth groups performing.

The Lakeland Youth Symphony since 1957 has provided musical education and performance opportunities for young musicians in Northern New Jersey. The organization now offers four progressively challenging levels of orchestras for experienced students, and a wonderful Prelude violin program for beginners. The goal of the Lakeland Youth Symphony is to enrich the lives of children through music!

Keys 2 Success is a not-for-profit organization that provides music education to children in public elementary school and project housing in Newark New Jersey. Keys 2 Success was founded in 2016 by Jee-Hoon Krska, a Juilliard-trained classical pianist, MIT-educated engineer, wife and mother of three who wanted to provide these children with the same opportunities available to her own children. Believing that music education is a vehicle that allows children to tap into their inherent capabilities, Jee-Hoon helps them develop the discipline and strategies to thrive, not just in music, but in academics and social situations thereby enhancing their lives and their communities. Modeled on the El Sistema program, Keys 2 Success provides individualized training on the piano, coupled with ensemble work to enhance collaborative ability and peer learning skills. Keys 2 Success is a community partner of the Junior League of Summit. A vibrant and growing community of volunteers drawn from the Newark and Summit area neighborhoods serve in the classroom and behind the scenes to form a robust network of mentors and advocates for the children, helping them navigate through and breakdown barriers to success.