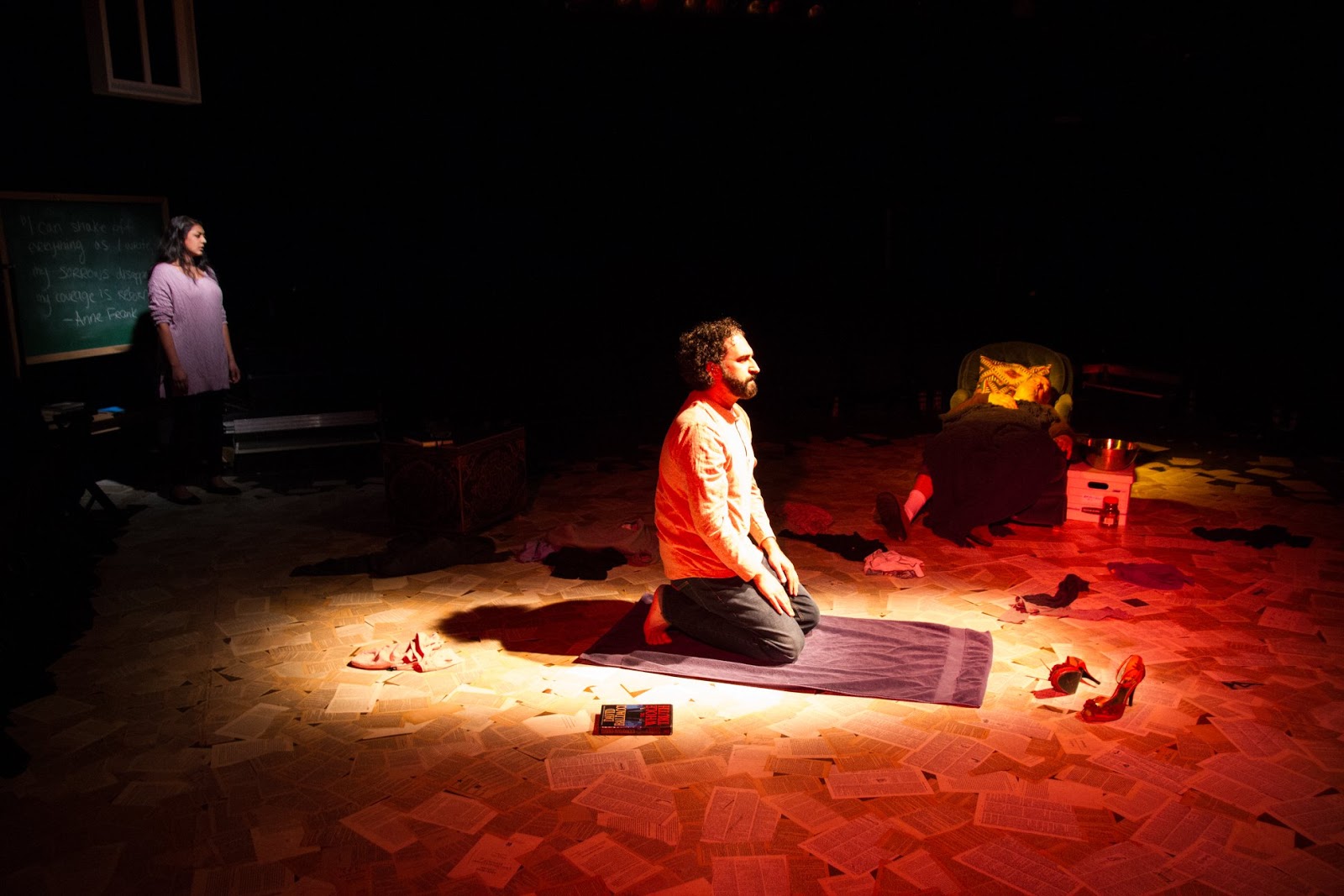 As I watched the tense plot of Gabriel Jason Dean’s drama, Heartland, unfold on Friday night at Luna Stage, I was struck by its similarity to Arthur Miller’s All My Sons, in which a young pilot’s death in World War II might be due to the corners his industrialist father cut when manufacturing airplane parts for the American military. This is not a criticism, for Dean has taken Miller’s prompt and run with it, setting his play in Omaha, Nebraska, and Maidan Shar, Afghanistan, and the time from October 2013 to March 2015 to produce a poignant, endearing, ultimately redemptive play about love. (Above: Lipica Shah, Kareem Badr and Brian Corrigan)

Heartland, the final offering of Luna Stage’s new Artistic Director Ari Laura Krieth’s inaugural season, recounts the final months in the life of Dr. Harold Banks, a retired professor who taught in Afghanistan during the 1970s and the father of Getee, the daughter he adopted in Pakistan. Dying of a cancer that robs him of words, Banks experiences psychological pain from a secret he’s withheld from his now 29-year-old daughter about his involvement 30 years before producing propagandistic textbooks for Afghan children that emphasized warlike Islamic teachings like jihad to foment Afghan resistance to the Soviet invasion. When Getee returns to Nebraska (the country’s “heartland”) and angrily confronts her father about his complicity in the rise of the Taliban and its subsequent reign of terror in Afghanistan (making her “culpable of the murder” of her own people,” she says), a rift occurs, but Naz, who has come for the same reason, quotes the poet Rumi to say, “Love will find its way through all languages on its own.”

That sentiment sums up Luna’s entire 2018-2019 season wherein the plays produced have involved conversations across cultural divides, conversations “that create change and understanding,” as Krieth has noted in her program notes. In its regional premiere, Heartland achieves that ambitious goal. The trio of actors Krieth has cast performs superbly as an ensemble, convincing the audience that they are the characters they portray, reciting dialogue naturally and making us really care about the characters, no matter how they behave toward each other. Too, the intimacy of the little black box theater enhances the experience. 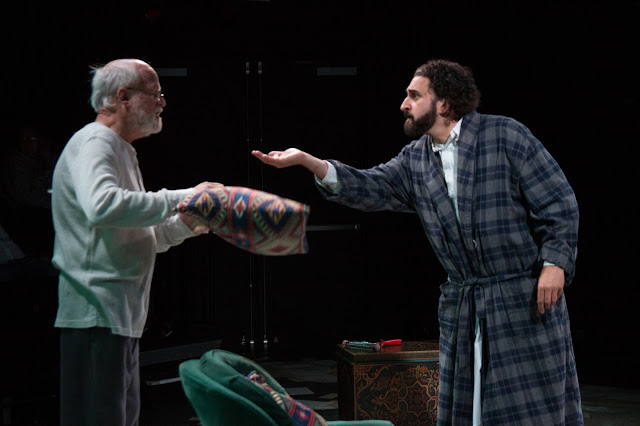 As an irascible Harold, Brian Corrigan (above, left) engenders our sympathy for a dying man, along with distaste for what he’s done. From the opening scene, where he searches for words while dictating (something many of us recognize as a “senior moment”) to the final scenes where glioblastoma, the cancer that killed Ted Kennedy and John McCain, cause him to utter total nonsense and reduce him to a near-corpse who, although unable to move, manages to croak out an apology, Corrigan conveys the nuances of character that enable a person to do the wrong things for what are believed to be the right reasons. 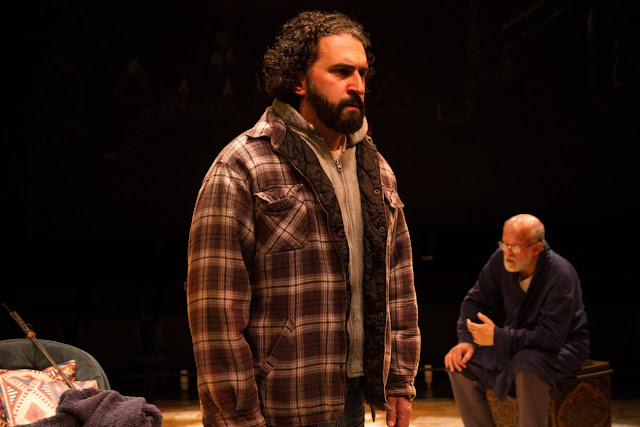 Kareen Badr’s Nazurllah enchants the audience just as he does Getee. Struggling with English, he’s alternately goofy and respectful of Getee; curious about The Diary of Anne Frank, the book she’s using to teach her female students to read English; and angry at discovering that the math textbook he used in school was propaganda produced by the United States to further the Cold War at the expense of Afghan children. He flirts with Getee, recites Rumi’s poetry, engages in a pillow fight with Harold and exhibits great chemistry—amorous and companionable—with the other two characters. 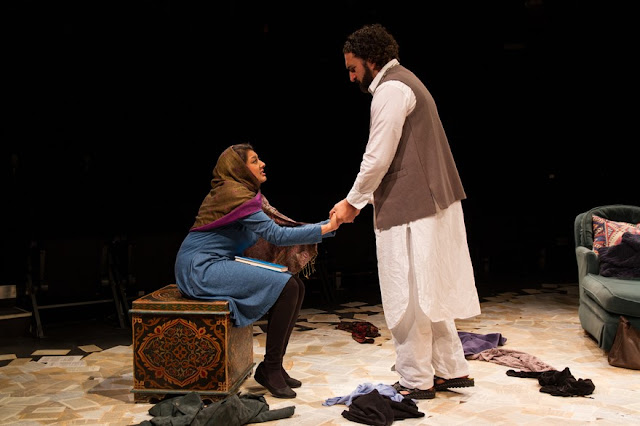 The third member of the cast, Lipica Shah (left, with Badr) as Getee, is equally as wonderful. Seesawing from one emotion to another, she charmingly fiddles with her head scarf, struggles adorably with the language (she has been raised as an American so is not fluent), playfully explains sarcasm to Naz and expresses outrage at what her father has done—all in a convincing performance that makes her fate all the more heartbreaking.

This production is to be congratulated on the blend of set, lighting and sound designs. Megan Culley has supplied Arabic-sounding music during scene changes; Jennifer Fok’s lighting is both atmospheric and functional to denote the two venues; and Jen Price Fick transports us from Omaha to Maidan Shar with just a few props, all moved on and off the in-the-round stage by the actors (who remain in character at all times). Deborah Caney’s costumes enhance the production without being too fussy; we immediately know where these characters stand by their attire. And the actors’ ability to speak Arabic is astonishing, as is Dean’s skill at interweaving that language with English, a feat enhanced with the help of Humaira Ghilzai, acting as Dean’s Cultural Consultant. 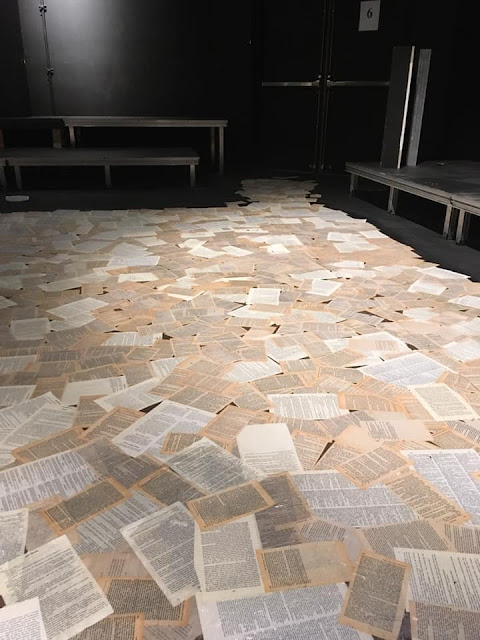 Heartland is filled with literary references (left, Fick’s set design), from Rumi’s poetry to Anne Frank’s Diary to Hemingway’s novella, The Old Man and the Sea. On the face of it, the latter two would seem to be odd choices for use in Afghanistan, a Muslim country and a land-locked one at that. Reading the Diary, the students (and Naz) learn to open up and express their emotions; The Old Man and the Sea teaches the value of friendship, the necessity of dignity and perseverance in the face of adversity. Perhaps these three works soften, even repudiate, the raw political cynicism of the textbooks produced by Banks and used by Nazurllah in school.

Gabriel Jason Dean’s play is a story of three teachers, each of whom educates the other two about compassion, responsibility, regret, redemption, forgiveness and, above all, love. Heartland is a sobering, playful, romantic examination of the human heart (the other meaning of “heartland”)—one you will talk about for days afterward, which is exactly what Luna Stage wants you to do.

Heartland will be performed at Luna Stage, 555 Valley Road, West Orange, through May 5. For tickets and information, go to www.lunastage.org online or call 973.395.5551.