A musical about mental illness—and a quirky one, at that—doesn’t sound like it would fly, but Benny & Joon, now receiving its East Coast premiere at the Paper Mill Playhouse, succeeds mightily, way beyond its modest origins as a 1993 whimsical romantic comedy film starring Johnny Depp, Mary Stuart Masterson and Aidan Quinn. In the current version, music by Nolan Gasser and lyrics by Mindi Dickstein add an extra layer of nuance to this celebration of love in its various iterations: between parent-child, romantic partners and, above all, siblings. The result is a story that illuminates a difficult subject in a charming, endearing way. 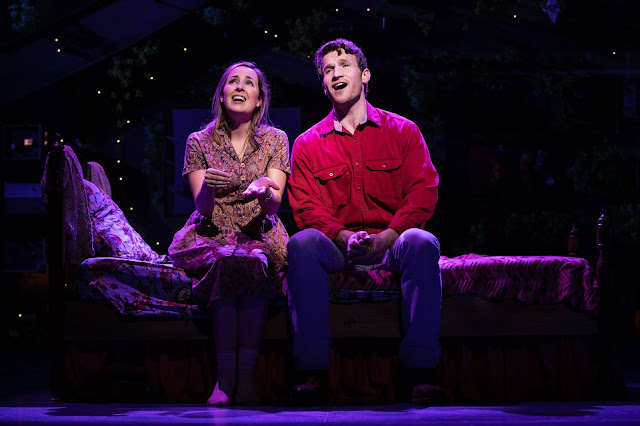 Life for thirty-something Benny doesn’t seem to count for much. For the past 15 years, since the tragic accident that claimed his parents, he has assumed the role of caretaker of his high-functioning schizophrenic, albeit talented artist, sister Joon, who requires round-the-clock care. Sacrificing a personal life, he associates with only the guys who work at his auto repair shop; romance doesn’t exist for him. When Joon wins Sam, an eccentric who emulates the antics of the great silent movie comedian, Buster Keaton, in a poker game with Benny’s friends, Benny agrees to let him stay a few days while he decides whether to find another housekeeper or place Joon in a group home, something he hesitates to do because he fears her reaction. As Sam and Joon fall in love and think of a future together, Benny must come to terms with the siblings’ changing relationship and his own needs and desires. 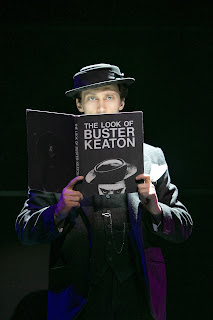 The book, by Kirsten Guenther, portrays the effects of mental illness on patient and caretaker with a clear eye; we see the toll worrying about Joon all the time takes on Benny, the lonely life he leads and the upsetting effects of noise, hallucinations and a desire to harm herself has on Joon. The effect is lightened by the sometimes-droll situations the two experience and the love they have for one another. Sam’s eccentricities (among other things, he recites lines from films in character and announces the title and year the film appeared) often make us laugh out loud, but learning that, while sane, he escapes to movies to avoid verbal abuse and abandonment, our heart goes out to him. Guenther manages to give voice to these characters without being cute or icky.

The offbeat quality of the play is enhanced by Dane Laffrey’s scenic design, a “map” of the suburb in which Benny and Joon live, with different houses lighting up as the action moves there. Lighting by R. Lee Kennedy conveys the passage of time while Kai Harada’s sound gives us a glimpse of what’s going on inside Joon’s head.

Kudos too to director Jack Cummings III, who keeps the action humming along while allowing the emotion to shine, and Scott Rink, whose choreography is often surprising and always inventive. 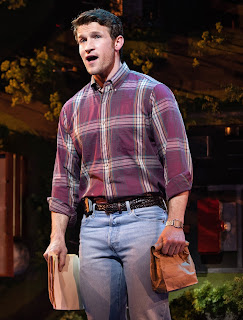 Claybourne Elders is terrific as Benny, protective to a fault, lonely, repressed. His love for Joon is evident in the sweet childhood song they sing together; his attention to her need for routine is telegraphed in a song entitled “This, This, This,” in which the two go over the schedule for the day. When he does connect with a woman his own age—Ruthie, the waitress/actress Joon has fixed him up with (played with warmth by Tatiana Wechsler)—only to be overcome by his responsibilities to Joon, we ache for him. And when he finally faces his feelings for his late parents and the situation their accident has put him in, we feel the relief emanating from him and see a way for him to heal. 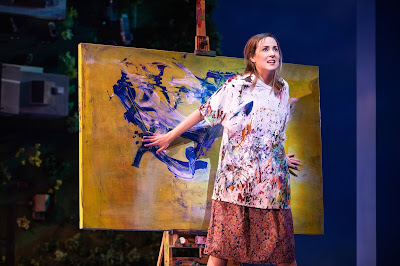 As Joon, Hannah Elless is maddeningly endearing, whether she’s painting, gluing red sequins to a cup, playing poker or directing traffic in a snorkel mask. Singing beautifully, she gives voice to the emotions Joon feels for her brother and Sam (“Happy”) and sticks up for her need for independence in the penultimate scene where she sings “Yes or No.”

But it’s Bryce Pinkham’s Sam who steals the show. As the first person we meet, strolling across the stage like Buster Keaton (he’s even wearing the actor’s porkpie hat and black suit), he sets the stage for the whimsicality and eccentricity that follow. Performing a ballet on roller skates while grilling cheese with an iron, dancing and juggling videotapes with the video store owner, and spouting lines from old movies, Pinkham is a master of physical comedy. But it’s not all pratfalls: He lets us see Sam’s wounded soul and need for love and understanding. 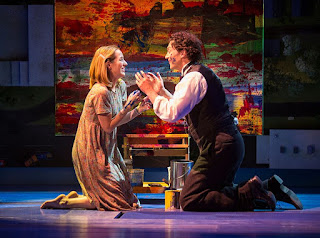 If you’re looking for big musical and dance numbers, Benny and Joon isn’t for you. But if you seek a heartfelt play with music and plain-spoken lyrics that tackles the hard problem of mental illness, performed by a cast of talented actors who can really sing and dance, you won’t want to miss Benny and Joon. In the past, the Paper Mill Playhouse has been known for its big productions of Broadway musicals; it’s a real treat for a theater-loving audience to experience something new in tone, execution and subject. This charming, endearing show will enchant you. And take the your teenagers, too. It’s a great way to talk about mental illness and responsibility with them afterward.

Benny and Joon will be performed at the Paper Mill Playhouse, 22 Brookside Drive, Millburn, through Sunday, May 5. For information and tickets, call the box office at 973.376.7676 or visit www.PaperMill.org.