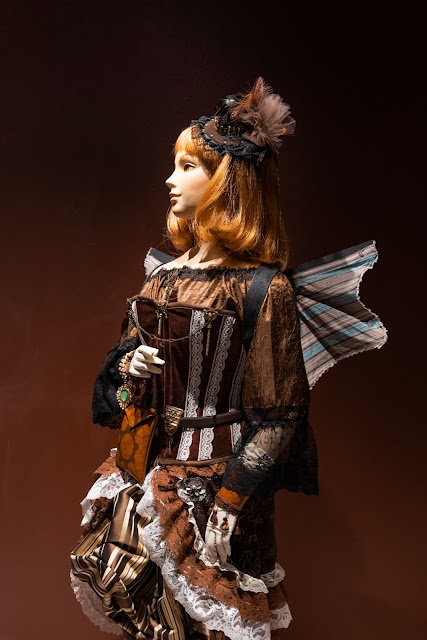 WHEN: April 3, 2019 - October 6, 2019
WHERE: Morris Museum, 6 Normandy Heights Road (at the corner of Columbia Turnpike) in Morristown
ADMISSION: $10 for adults and $7 for children, students and senior citizens. Admission is always free for Museum members.
Tickets may be purchased online at morrismuseum.org, by phone at 973.971.3706, or in person at the Morris Museum. The Morris Museum’s Bickford Theatre is located at 6 Normandy Heights Road in Morristown, NJ, and offers free parking and full accessibility. Box office hours for phone sales are Monday through Friday, 10:00 a.m. to 5:00 p.m.

This new exhibit at the Morris Museum features work by designers Paige Gardner, Amber O'Boyle Kulp and Colleen O'Neill. It showcases a selection of women's and men's costumes and accessories that illustrate the eclectic and individualistic nature of steampunk fashion today. To provide a historical context for the six costume ensembles on display, 19th-century Victorian Era clothing and accessories from the Morris Museum’s permanent collection have been integrated into the installation, highlighting the design connections and deconstructions that oftentimes serve as the inspiration for steampunk costumers. 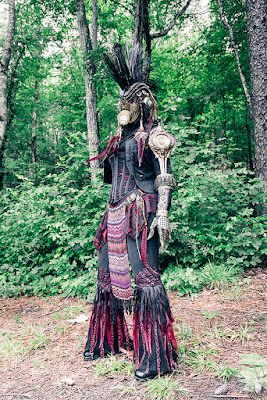 Fashion is one of the many subcultures of the steampunk movement—including art, design, literature, music, film, video and toys—that arose from the visual aesthetics of steampunk fiction in the 1980s. In the world of Steampunk, attire serves as an extension of "cosplay," or costume role-playing, in which participants represent specific characters or personas known as "steamsonas." Popular steamsonas include pirates, military, explorers, inventors, ladies, gentlemen and Wild West characters. Designers intentionally conflate interpretations of 19th-century high-style attire with mechanical elements that evoke technological advancements of the period, such as gears and goggles, to create the traditional retrofuturistic steampunk aesthetic. Stylistic tropes range from wearing undergarments such as corsets on the outside, to fantastical accessories such as flying machine-like wings strapped on like a jetpack.

From hats to spats, the Victorian Era elements in the exhibition were chosen to show how the trends of the 1800s have influenced steampunk fashion. Giving a nod to the technology and inventions of the day are curious artifacts such as a stereoscope, Magic Lantern and tailboard camera, as well as art and furnishings.

“The steampunk subculture draws fashion inspiration from archetypical characters, science fiction, and technology of the past, and its fashion is based on repurposing old items in a modern and imaginative way," states guest curator Kathy Francis. "Nineteenth-century clothing

recreations are mixed with gears, moving parts, and attitude, conveying a message of practicality, romanticism, adventure, and self reliance. Thus the fashion becomes not only art, but an artistic outlet for self-expression and creativity."

Four of the six steampunk costume ensembles were made expressly for this exhibition. While some are traditionally Steampunk, others push the boundaries and foreshadow future trends.

Following the success of last year's inaugural exhibition, this year explores the theme of steampunk art─incorporating the aesthetics of 19th-century industrial design and steam engine machinery─through 18 works of kinetic sculpture by 12 artists that were selected by a jury of practitioners in the field. The artwork on view ranges in scale from jewelry to room-sized installations, and in scope from traditional retrofuturistic sculpture to more broadly-interpreted light and soundscapes. These imaginative creations are marvels of design, engineering, storytelling, and fantasy that demonstrate the ingenuity of steampunk art today.

Founded in 1913, the Morris Museum is an award-winning, community-based arts and cultural institution serving the public through its exhibitions in the arts, sciences and humanities. The Museum is home to the historic and internationally-significant Murtogh D. Guinness Collection of Mechanical Musical Instruments and Automata. Changing exhibits of contemporary content also explore the Guinness themes of art, sound, and motion. The adjacent Bickford Theatre is the museum's 312-seat performing-arts facility, offering unique programming, often related to the museum's exhibition themes. Continuously serving the public since 1913, the Morris Museum has a proud tradition of innovative educational programs and family events. The first museum in New Jersey to be accredited by the American Alliance of Museums, it has been designated a Major Arts Institution and has received the New Jersey State Council on the Arts’ Citation of Excellence, among other awards.