WHEN:  Sunday, April 14, 3 p.m.
WHERE: Dolan Hall, The Annunciation Center, at The College of St. Elizabeth, 2 Convent Road in Morristown, NJ.
TICKETS: $40, adults; $30, senior; and $5 students, under 22 with ID. Tickets can be obtained by visiting the Orchestra’s web site www.baroqueorchestra.org or by calling the office, 973-366-8922; or at the door on the day of the performance.

"I look forward to conducting the music of Handel, Mozart and Beethoven," Maestro Butts explained, "They are three of my favorite composers. While Handel was a composer of what is called the Baroque Era (1600-1750) and Mozart and Beethoven were part of the Classical Era (1750-1827), Handel's music was a major influence on both later composers. Mozart re-orchestrated several of Handel's works - including Messiah for concerts produced by Baron von Sweiten in Vienna.  Beethoven held that Handel was one of the greatest of all composers."

“Handel's Water Music consists of three suites of mostly dance movements. For our concert, we will perform a bouree, hornpipe, sarabande and rigadon.”

"Mozart's flute concertos are wonderful," Maestro Butts continued. "They are so vibrant and so filled with life." Mozart's Concerto in D Major will feature flutist Mei Stone, winner of the 2018 Pearl & Julius Young Music Competition.

Ms. Stone, currently a student at Julliard, is principal flutist of the New York Youth Symphony. She performs with the Julliard orchestra and other music groups at Julliard. 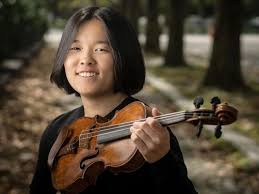 "Beethoven's Violin Concerto is one of the repertoire's most wonderful works," Maestro Butts said in conclusion. "It is filled with unforgettable melodies, challenging technical passages, poignant beauty, and a final filled with verve and vitality." Beethoven’s Violin Concerto will feature guest artist Lisa Romain as violin soloist.

Ms. Romain is based in Budapest where she performs as a member of the Concerto Budapest orchestra and with chamber groups. Previous solo performances in the US by her include Alban Berg’s Violin Concerto at Lincoln Center and Bach and Mozart concertos with the Sussex Symphony.