Despite my having taught The Glass Menagerie to high school juniors for 10 years, the last time I saw a live production of the play was at the Shakespeare Theatre of New Jersey in 2003! Perhaps that long hiatus explains how bowled over I was last night by Tennessee Williams’ poetic language in the luminous and very affecting production of this American classic currently onstage at the Summit Playhouse.

Featuring one of the great female roles of all time, the play’s plot is classic Williams: fading Mississippi belle Amanda Wingfield attempts to raise her two now-adult children, physically and psychically disabled Laura and dreamy, adventure-seeking Tom, in the slums of St. Louis. Amanda ropes Tom into inviting a co-worker home as a gentleman caller—a possible suitor and subsequent mate—for Laura, thus ensuring a secure future for this pitiful young woman. Tom complies, with disastrous results, and his relationship with his family is shattered forever.

From the outset, Tom as narrator announces that this is a “memory play” and, thus, is not realistic. The idea is heightened when Tom and Laura mime eating and the candelabra is lit with imaginary candles. That “everything happens to music” is underscored by Wendy Roome’s sound design featuring tinkling music whenever Laura plays with her glass animals and ominous sounds when Amanda comes home to accuse Laura of not attending her typing course and lying to her mother about it. And Gordon Wiener’s three-part set—rear dining room, front living room and fire escape stage right—provides the perfect spot on which this memory play unfolds. The brick wall on one side of the set serves as a visual reminder of the Wingfield family’s isolation from the real world. 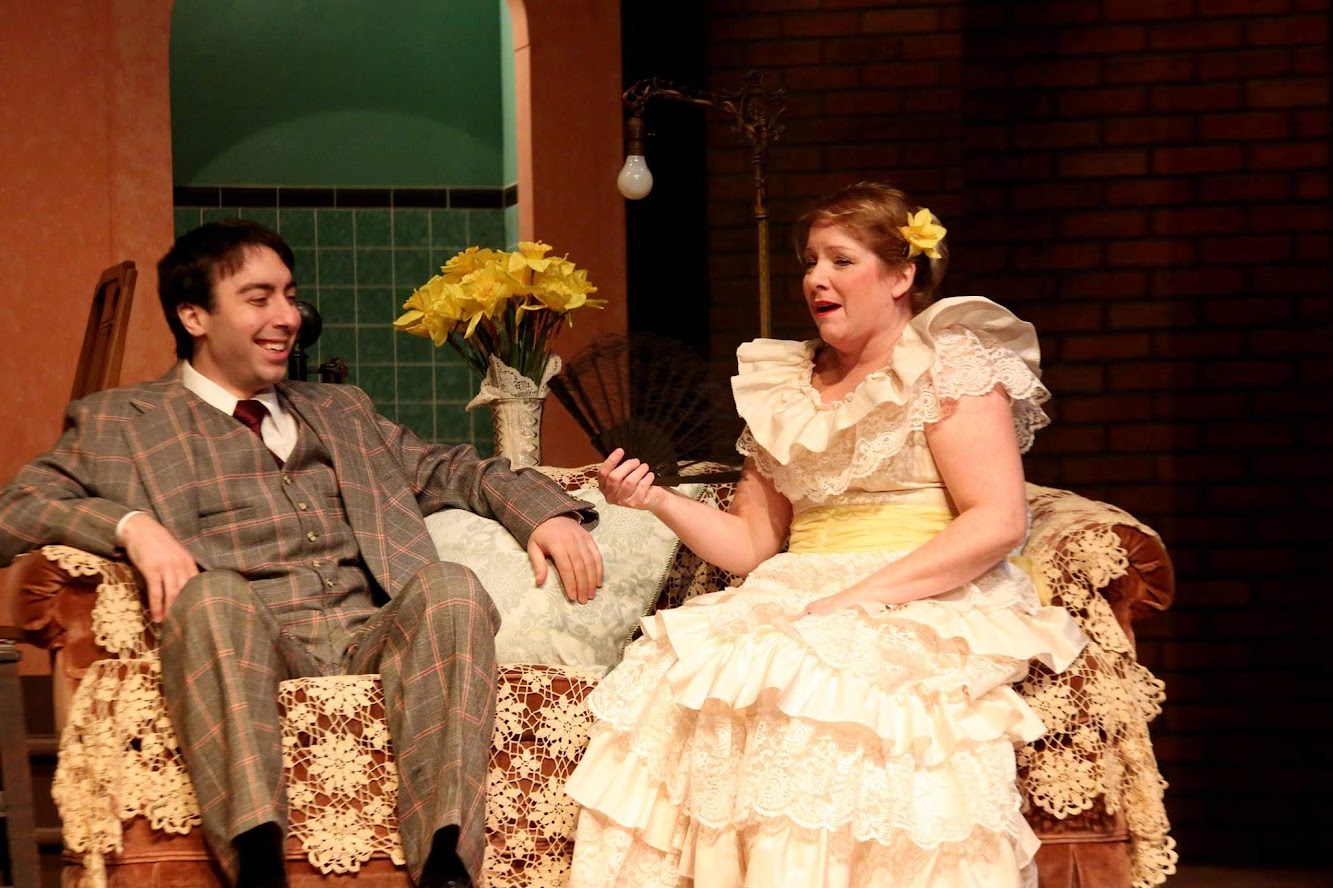 Director Arnold J. Buchiane’s reverence for The Glass Menagerie is evident in the production’s leisurely pace and the sympathetic performance he elicits from Gloria Lamoureux as Amanda, a woman so “bewildered by life” that she takes refuge in recalling ad nauseum the day she had 17 gentleman callers! Lamoureaux (above, with Anthony Bentrovato) is superb when recalling her debutante cotillions and picking jonquils, and outrageously, desperately flirting with Jim O’Connor, the young man Tom has brought to dinner. Her version of Amanda is more sad than witchy; she gives us a sense of how much she gave up to marry a man with a charming smile, only to be left demonstrating brassieres in a department store or calling women to renew their magazine subscriptions to help make ends meet!

As Tom, Gus Ibranyi is more successful as son chafing at his mother’s mettlesome behavior than as introspective narrator. In the latter role, his too-quick delivery deprives the audience of the chance to fully savor Williams’ poetic words, making his desertion of the family, especially Laura, feel a tad less poignant and guilt-ridden. It isn’t until the intimate scene where Tom informs his mother that he has invited a Gentleman Caller home to dinner that the gentle, leisurely banter clearly shows the antagonists’ love for each other, despite their carping. It’s then that Ibranyi and Lamoureaux establish the mother-son bond so missing from the earlier scenes. Ibranyi is especially fine when he goes off on his mother for her constant questioning of why he goes to the movies so often. We feel his rage, even as he spins a wild tale from that fevered imagination of his.

Emily Miller’s portrayal of Laura is gut-wrenching. Her high, whiny voice tends to grate, but her trembling self-consciousness makes her crippling shyness palpable. She is a veritable bowl of jelly! We ache for her when she admits to her mother that she dropped out of business school and has been spending her days at the art museum and zoo, when she takes out her yearbook and opens it to the exact page where the boy she liked in high school is pictured, when she’s so defeated at the end of the play that she sits in an armchair, curled into a ball as if wanting to disappear. She ably communicates Laura’s double handicap: an embarrassing limp and pathological shyness.

And finally, Anthony Bentrovato (top image) is terrific as Jim, the decidedly lower-class gentleman caller, who sits on the floor, chews gum (and puts it in his pocket when he’s finished with the wad), brays at Amanda’s corny jokes, gives Laura unsolicited advice and ultimately breaks her heart. While he may not have the physique of a former football player, he conveys very well how full of himself Jim is when he touts what he’s doing to better his position in life and career.

Ann Lowe is to be commended for her costume design; Amanda’s ruffled yellow cotillion dress (top image) is appropriately ridiculous for a middle-aged woman, and Jim’s cheap three-piece suit lets us know he thinks of himself as the “executive type.” And Ben Wolf’s lighting is atmospheric, even when the electricity dies and they resort to the battered candelabra.

Watching The Glass Menagerie reminded me just how much I loved teaching and discussing the play with my high school students. The Summit Playhouse’s production fills the void of 16 years since it has been performed locally. It is such an important part of America’s literary heritage that it begs to be produced and seen. You have two more weekends to get on over to see it. And if you have a teenage son/daughter, niece/nephew or friend, take him/her with you. You’ll have a great deal to talk about after the curtain comes down.

The Glass Menagerie will be performed at the Summit Playhouse, 10 New England Ave., Summit, through March 16. For information and tickets, call the box office at 908.273.2192 or visit www.TheSummitPlayhouse.org online.