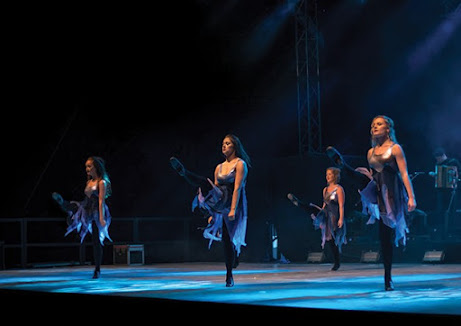 But this is no ordinary Irish dance performance. Along with a live orchestra and original music, it tells a story of hope and despair while incorporating dark, cinematic undertones.

“The story is very powerful,” said lead dancer and show creator Chris Hannon, a veteran of Lord of the Dance. “It’s a theatrical show rather than full-on Irish dance.”

The once peaceful Eire has descended into a corrupt territory where tyrants rely on fear and intimidation to force people into submission. The Murphys flee in hopes of finding a better future. While crossing the Atlantic Ocean, their ship is met with a violent storm, which washes them onto the tranquil island of Ishan. Little did they know that a dark queen and her soulless king rule the island. Have they replaced one hell for another that is more terrifying and savage?

Hannon began Irish dancing at the age of 8 under the direction of his mother and grandmother at their internationally recognized Hannon Murphy School of Irish Dancing, which he now co-owns. At age 16, after competing around the world, he joined the tour of Michael Flatley’s Lord of the Dance. By age 20, Hannon was performing the lead roles in both Lord of the Dance and Feet of Flames, one of only five principal dancers to have performed this role alongside Flatley.

“I absolutely loved Lord of the Dance,” said Hannon. “Dancing on stage with Michael Flatley was really something else.”

For 14 years, he performed with Flatley around the world, from Dubai to Russia and back to London, where he entertained the Prince of Wales at Buckingham Palace. After producing four successful pilot shows for Lord of the Dance, Hannon decided to launch his own company in 2015.

“Having original music, for me, is extremely important,” said Hannon. “My grandmother was a grand Irish musician. She played the accordion piano. We used one of her original compositions called From Darkness Comes Light. It’s as if this was all meant to be.”

Founded in 1855, Kean University has become one of the largest metropolitan institutions of higher education in the region, with a richly diverse student, faculty and staff population. Kean continues to play a key role in the training of teachers and is a hub of educational, technological and cultural enrichment serving nearly 15,000 students. The University’s five undergraduate colleges offer more than 50 undergraduate degrees over a full range of academic subjects. The Nathan Weiss Graduate College offers six doctoral degree programs and more than 60 options for graduate study leading to master’s degrees, professional diplomas or certifications. With campuses in Union and Toms River, New Jersey, and Wenzhou, China, Kean University furthers its mission by providing an affordable and accessible world-class education. Visit www.kean.edu.
ABOUT KEAN STAGE
Kean Stage at Kean University educates, entertains and challenges audiences by presenting high-quality programs that reflect the diversity of the region and of the arts. These cultural offerings compliment the intellectual life of the classroom for our students, increase opportunities for community engagement, and provide affordable access to the arts for New Jersey residents. Audiences of all ages are invited to enjoy a wide range of professional theatre, Broadway tours, dance performances, concerts, international films and family-friendly shows. In addition, Kean Stage encourages University students to attend events, and provides several opportunities to explore the performing arts through master classes, workshops, lectures, and employment opportunities as ushers, backstage technicians and box office staff. Visit www.keanstage.com.