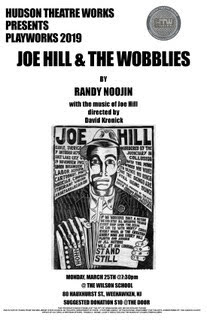 WHEN: Monday, March 25, @ 7:30PM
WHERE: 80 Hauxhurst Avenue, The Wilson School, Weehawken, NJ 07086
ADMISSION: $10 Suggested Donation
For transportation information please go to: http://www.weehawken-nj.us/transportation.html
For more information or questions, go to www.hudsontheatreworks.org or hudsontheatreworks@gmail.com.
To receive a full schedule of events for The Stages Festival please visit www.stagesfestival.org.

A young Swedish immigrant uses his songwriting to fight for a revolution of the working class in the American West.

Playwright Randy Noojin will present a reading of his new play as part of the annual Hudson Theatre Works play reading series, PlayWorks.

Randy Noojin has acted in hundreds of plays regionally and in New York at Circle Repertory, La Mama E.T.C., Hudson Theatre Works, Circle-in-the-Square Downtown, The Circle Rep Lab, The Kraine, The 45th Street Theatre, The Flamboyan, Alice’s 4th Floor, West Bank Theatre Downstairs and The Drilling Company. On television, Randy has appeared on Boardwalk Empire, Royal Pains, The Americans and in the films Molly’s Game, Expire, Caseworker, Die Barkley and The Bench. He was nominated for a Best Actor ariZoni Award for his performance of Martin in Edward Albee’s THE GOAT, OR WHO IS SYLVIA at Actor’s Theatre of Phoenix, directed by Marshall W. Mason. He has played Hank Williams in numerous productions of HANK WILLIAMS: LOST HIGHWAY, including at Southern Appalachian Repertory Theatre, Mill Mountain Playhouse and New Stage in MS. He holds an MFA in Performance from Arizona State University.  Randy’s critically acclaimed multimedia solo shows SEEGER, and HARD TRAVELIN’ WITH WOODY, premiered at The New York International Fringe Festival and continue to tour nationwide (see www.HardTravelinShow.com and www.SeegerShow.com)There is nothing more important to the long-term vitality of American theatre as an art form than the nurturing of new voices.  PlayWorks is the first step in this process.  PlayWorks presents readings of new plays by contemporary, often local playwrights, giving them an opportunity to share their work and include the audience in the creative process.

Plays are performed by professional actors and each reading is followed by a audience discussion with the author, giving our supporters a rare opportunity to become an important part of the creative process and to engage the playwright with questions, comments and their personal insight into the work.