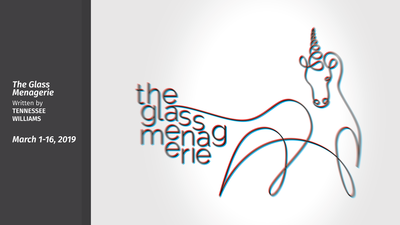 The Glass Menagerie
by Tennessee Williams
directed by Arnold Buchaine

The Glass Menagerie is a memory play by Tennessee Williams that catapulted Williams from obscurity to fame. It looks at the Wingfield family—frustrated writer Tom, his nagging mother Amanda, who is often lost in memories of her Southern-belle past, and his painfully shy sister Laura—and the effect a visit from a gentleman caller for Laura has on all their lives.

The play premiered in Chicago in 1944 and later moved to Broadway where it won the New York Drama Critics' Circle Award in 1945. The Glass Menagerie was Williams' first successful play; he went on to become one of America's most highly regarded playwrights.

The cast features Gloria Lamoureux as Amanda Wingfield, Gus Ibrany as Tom Wingfield, Emily Miller as Laura Wingfield, and Anthony Bentrovato as Jim O'Connor. The production is directed by Arnold Buchaine and produced by Pamela Wilczynski.