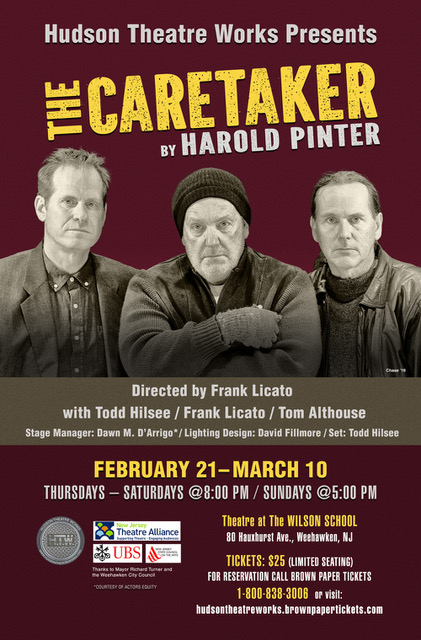 WHEN: February 21 - March 10, Thursday thru Saturday – 8pm; Sunday – 5pm
WHERE: 80 Hauxhurst Avenue, Weehawken
TICKETS: $25, in keeping with Hudson Theatre Works’ policy of low price tickets.
For more information or questions, go to www.hudsontheatreworks.org  and for tickets go to hudsontheatreworks.brownpapertickets.com.

Davies (Frank Licato), an aging down-and-out, is given shelter by the kindly but vulnerable Aston (Todd Hilsee). He quickly settles in, calmly making himself at home in the squalid, junk-filled room until Mick (Tom Althouse), Aston’s brother, a far more astute character, arrives. A battle of wits begins as the brothers seek to manipulate the old man to their respective ends. But Davies has his own agenda and not everything is as it seems.

A landmark of twentieth century drama, The Caretaker was first performed at The Arts Theatre, London in 1960. Over 40 years on, Pinter’s compelling study of loneliness and power games still has the power to amuse, to shock and to fascinate.

Playwright, director, actor, poet and political activist, Harold Pinter was born on 10 October 1930 in East London.  He wrote twenty-nine plays including The Birthday Party, Old Times, The Homecoming and Betrayal. In 2005, he was awarded the Nobel Prize for Literature. He died on Christmas Eve 2008.

Todd Hilsee (Aston) was seen in Hudson Theatre Works’ (HTW) productions of Macbeth and Stubble by Erin Mallon. He also performed in The Sword of the Unicorn, an original play about an adolescent coming out, at Theater for the New City. He was one of the producers of Golda’s Balcony at the Helen Hayes Theatre (2003), the longest-running one-woman show in Broadway history. Todd is an internationally-recognized mass communications expert, notifying victims of defective products, and served as the regular on-camera host of “man on the street” interviews to benefit federal judicial education. He has appeared on 60 Minutes (2017) to expose defective Remington rifles—and Last Week Tonight (2017) John Oliver’s spoofing of 60 Minutes anchors. He is currently producing The Puzzle, an original play about clowns and an autistic child, which he workshopped in (2018) with Tony Award-winning clown Bill Shiner directing.

Tom Althouse (Mick) is a performer and writer who has toured internationally and received awards and recognition both as a writer and actor including the Hoku Award for Best Actor in the Maui Fringe Festival. He is thrilled to be performing with his cousin in his debut at Hudson Theatre Works and under such a stellar director and team. Among numerous roles, he has been Matt in The Fantastiks, Oscar Linquist in Sweet Charity, Tartuffe in Tartuffe: Born Again, Maui Civic Light Opera's The Phantom of the Opera, Tony in Tony and Tina’s Wedding, Richmond in Richard III, Hastings in She Stoops to Conquer, Billy Crocker in Anything Goes, Hero in A Funny Thing Happened..., and Malcolm in the Scottish play. Tom has also performed with a number of improv companies throughout the country. Currently a documentary is in the works regarding his life and screenplay. Tom’s work has received national awards along with critics picks by Backstage West and LA Weekly for his role as Demetrius in A Midsummers Night's Dream at Will Geer Theater in which the LA Times proclaimed him a "delight."

Frank Licato (Director/Davies) is the recipient of the 2018 Tanne Foundation Award for continued artistic excellence. Tanne Foundation awards recognize outstanding achievement and are an expression of gratitude to artists for their passion and commitment to their work. He is a member of the Actors Studio Playwrights and Directors Lab. Most recent acting roles include the movie Modern Houses with Lily Taylor and the plays Glamour by John Patrick Shanley as part of Hudson Theatre Works 10 Minute Festival, Tranquil by Andrew Rosendorf at Luna Stage, and Dreaded Bliss by Michael Bias at the Garage Theatre. www.franklicato.com

Theatre on the Edge:

Hudson Theatre Works is committed to ensemble collaboration as well as artistic risk through its work with its permanent company, guest artists, partner institutions and the surrounding community.  It is dedicated to a rugged aesthetic which seeks to tell stories, both new and old, classic and contemporary, that reflect our lives, relationships and world today.  Hudson Theatre Works’ primary focus is in bringing a living theatre community to the area of  North Jersey through performance, outreach and theatre arts instruction.

The show is sponsored by Weehawken Mayor Richard Turner and the city council, UBS, The Campbell Foundation, Actors Equity and Walmart.