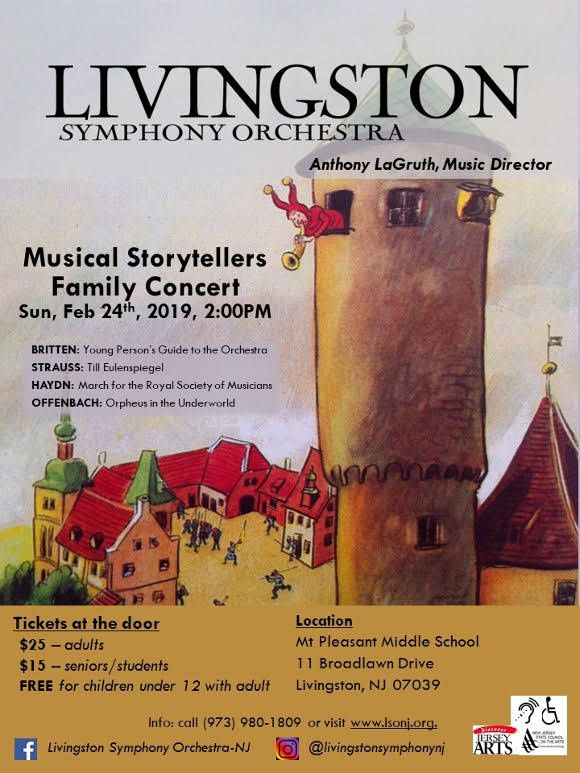 Through light classical pieces including Britten’s “Young Person’s Guide to the Orchestra” and Strauss’ “Till Eulenspiegel,” attendees will be introduced to the color and range of each individual instrument in the orchestra. Professional actor Jimmy Noonan will serve as narrator, and free tofutti frozen dessert will be served at the end of the concert.

The central work of the performance is Britten’s piece. He starts by having the entire orchestra play a theme(based on a main melody by Purcell), then proceeds to having it performed individually by the four sections of the orchestra, i.e., strings, woodwinds, brass and percussion. Next, one by one, 13 separate instruments play their version of the theme, demonstrating their unique range and color as well as changes in dynamics (loudness), tempo (speed, and mood). Each variation is preceded by commentary. Once all of the variations are complete, the piccolo introduces a new theme, and the second half of this piece becomes a fugue, where musical ideas are tossed around the entire orchestra. At the end of the piece an elongated version of the first theme is proclaimed by the brass instruments.

The instruments introduced, next is Haydn’s March for the Royal Society of Musicians. At first the audience will notice a smaller contingent of musicians on stage- only two horns and 2 trumpets, no trombone or tuba and the timpani alone representing the brass section. Haydn was the court composer in Vienna for 30 years, but he took two separate ventures to England where he performed concerts and dined with the royal family. The piece was originally scored as a brass and woodwind fanfare to the Prince of Wales. Haydn was later asked to contribute a piece to a yearly charity concert and he added stringed instruments to the orchestration. The charity—the Royal Society of Musicians—supports indigent musicians in their old age and still exists today.

Familiar with the different instruments and their sounds, it should be easy next to enjoy, Strass’ tone poem, “Till Eulenspiegel,” the tale of a medieval prankster. Opening with a “once upon a time theme,” listen next for two themes that represent Till—the first by the French horn which rises to a peak and falls down and ends with three long notes. The second theme, voiced initially by the D clarinet, has been characterized as crafty and suggestive of laughter. The ensuing music describes many of Till’s adventures, including stealing a horse and riding it in the countryside and through a market, upsetting goods and wares, poking fun at the clergy (violas), mocking the academics (bassoon), flirting and chasing girls(violins). He ultimately is caught by the authorities, represented by a funeral march at the climax of the piece. The once-upon-a-time theme and one more musical joke from the clarinet bring the piece to a close.

This year’s Family Concert provides an opportunity for all to appreciate the individual instruments that make up the orchestra and to listen to and for specific musical themes. Children under 12 accompanied by an adult are free, as are students 12-18 years old. Concert goers are invited to join the musicians at concert’s end for tofutti frozen desserts. For more information, please visit the orchestra’s website www.lsonj.org or call (973)980-1809.