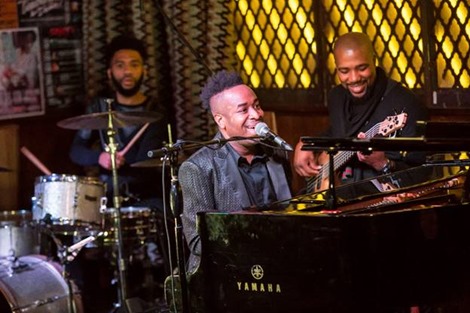 WE SHALL OVERCOME: A CELEBRATION OF DR. MARTIN LUTHER KING, JR.

McCarter Theatre Center will present multi-genre recording artist Damien Sneed and his unique blend of classical, jazz, and gospel music with We Shall Overcome: A Celebration of Dr. Martin Luther King, Jr. Inspired by the words and action of Dr. King, We Shall Overcome features repertoire from across the African American music traditions that electrified generations of civil rights activists and defenders, interwoven with spoken word from Dr. King’s speeches.

The year 2019 marks the 35th anniversary of Dr. Martin Luther King, Jr. Day, which was signed into law and made a federal holiday in 1983. Sneed notes, “I look forward to honoring the life and legacy of the great civil rights leader, Dr. Martin Luther King Jr., in my upcoming tour as well as many other great artists and public figures who used their voices and their art to let the world know that one day we will truly overcome.”

Damien Sneed is a pianist, organist, conductor, composer, producer, arranger, vocal coach, and arts educator whose work spans multiple genres. He has worked with classical, jazz, pop, and R&B legends including the late Aretha Franklin, Wynton Marsalis, Jessye Norman, Stevie Wonder, Diana Ross, Ashford & Simpson, Lawrence Brownlee, and many others.  A graduate of John S. Davidson Fine Arts School in his hometown of Augusta, Georgia, he earned a Bachelor of Music in Piano Performance from Howard University and a Master of Music in Music Technology: Scoring for Film and Multimedia from New York University. Sneed will also graduate with his doctorate in Orchestral Conducting from USC in fall 2018. He is the founder and artistic director of the international vocal ensemble Chorale Le Chateau, and the founder of LeChateau Earl Records. Just in time for this tour, Sneed will release his forthcoming recording Damien Sneed: We Shall Overcome. His most recent release was the 2018 set, The Three Sides of Damien Sneed: Classical, Jazz and Sanctified Soul.

About McCarter Theatre Center
McCarter Theatre Center’s mission is to create world-class theater and present the finest performing artists for the engagement, education, and entertainment to the community. Under the artistic leadership of award-winning playwright and director Emily Mann and Managing Director Michael S. Rosenberg, McCarter produces a vibrant six-play Theater Series each season. Winner of the 1994 Tony Award® for Outstanding Regional Theatre, world premieres include Christopher Durang’s Vanya and Sonia and Masha and Spike (2013 Tony® - Best Play); Tarell Alvin McCraney’s The Brother/Sister Plays; Emily Mann’s Having Our Say; and Danai Gurira’s The Convert. Other works which later moved to Broadway include Brian Friel’s Translations, Nilo Cruz’s Anna in the Tropics (Pulitzer Prize), and Frank McGuinness’ translation of Electra. Through the leadership of Special Programming Director William W. Lockwood, McCarter brings the best artists from around the world to Princeton, New Jersey, including upcoming visits from Dianne Reeves, Esperanza Spalding, Andy Borowitz, and many more. Education and outreach efforts serve tens of thousands through student matinees, in-school residencies, and adult education classes. McCarter is supported by contributions from Princeton University, the New Jersey State Council on the Arts, corporations, foundations, and from over 2,000 individuals. More at mccarter.org.

The 2018-2019 Signature Series at McCarter is sponsored by Bloomberg Philanthropies.