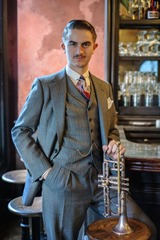 MICHAEL DAVIS AND THE NEW WONDER

At twenty-six years old, “eloquent trumpet prodigy” Mike Davis (Wall Street Journal) has a voice beyond his years on his instrument. His playing is imbued with the sounds of prohibition-era speakeasies, Hoovervilles of the depression, and glittering jazz palaces of the swing era, creating a timeless cocktail of American music. A graduate of the Manhattan School of Music, Mike began his trumpet instruction at age nine with Jerry Oram in Seattle and went on to study with Laurie Frink during his undergraduate years. Both encouraged his interest in early jazz styles, which led to his beginning to work professionally in New York City while still in college. He now appears regularly around New York City as the leader of the New Wonders and with Dandy Wellington and his band, Emily Asher’s Garden Party, Glenn Crytzer, Terry Waldo, Baby Soda, Dan Levinson and many other traditional jazz and swing bands. A regular at the celebrated jam session at Mona’s Bar, Mike is one of the vanguard of young musicians bringing traditional jazz to the forefront of the NYC music scene.