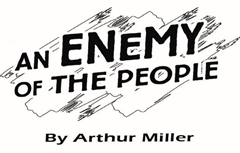 Auditions will consist of reading from the script. Sides will be provided.
Rehearsals begin immediately, three times per week; starting March 3, every evening.


About the show:
Pitting government against the press, well-being against economics, and family member against family member, this classic drama focuses on a doctor who has discovered a potentially dangerous health situation in his town and must now risk everything to do what he thinks is right. It raises and examines from all angles the question of what it takes to stand firm in one’s beliefs despite the objections of others.


Characters: (ethnicity and gender are open for most roles):